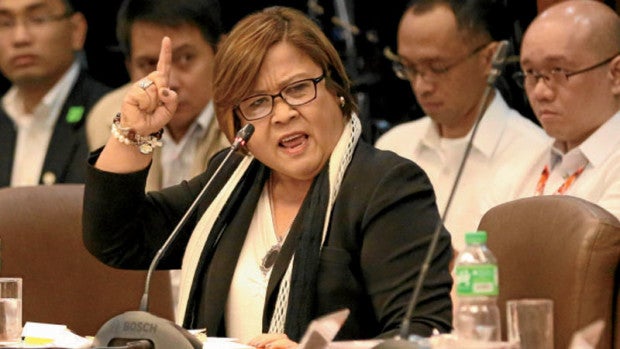 Senator Leila de Lima on Monday vowed to fight the proposed restoration of the death penalty in the country as the Senate is set to start its discussion on the issue this week.

The Senate committees on justice and human rights, and on constitutional amendments and revision of codes are scheduled to tackle the proposal at 10:00 a.m. on Tuesday.

“It is shaping out to be a fight. It is not a fight that we are called to fight with our fists, weapons or even words. It is a fight we must fight in our minds: the fight to resist being psychologically and morally broken down by events,” De Lima said in a statement.

“Death was never as much an effective instrument of justice, as it has been a horrifyingly potent weapon for the politically and militarily powerful to wield against those they seek to oppress and subjugate,” she added.

De Lima, former Justice Secretary, pointed out that even during the Aquino administration, she has always been vocal against the capital punishment, which she said “is especially deleterious and prejudicial to the poor.”

“My insight as former justice secretary is that by far, the most damning testimony against capital punishment is the wrongful sentences that have plagued different jurisdictions in the world pursuing the hallow promise of death penalty,” she said.

“If you think about it, the most certain promise of death penalty is the collective nightmare of a people who will eventually wake up to realize that an erroneous death sentence is immutably and tragically irreversible.”

The senator said she would instead push for the immediate passage of her Senate Bill (SB) 368, which seeks to increase the period for reclusion perpetua or life sentence to 50 years with no possibility of parole as an alternative to death penalty.

“I am not only fighting several legislative measures pending before the Senate that will bring back the death penalty, but also I am championing my own alternative bill imposing qualified reclusion perpetua for extraordinary heinous crimes,” the senator said.

De Lima explained that under the bill, the penalty of reclusion perpetua would be imposed against those convicted of extraordinary heinous crimes, such as trafficking, terrorism, kidnapping, carnapping, rape, murder, plunder, among others.

The senator has also filed SB 369 which seeks to streamline and strengthen the process of criminal investigation that would expedite and improve the administration of the criminal justice system in the country.

Senator Francis “Chiz” Escudero, member of the Senate minority bloc, has also promised to campaign against the revival of the death penalty.

“I am against Death Penalty Bill. I will interpellate, I will vote against it and as best as I can, try to convince my colleagues not to support it,” Escudero said during last week’s forum in the Senate. JE