AFP tells Duterte: We won’t fail you in war vs drugs

Military declares it will do its duty, back PDEA in anti-drug drive,
By: Jerome Aning - Reporter / @JeromeAningINQ
Philippine Daily Inquirer / 11:44 AM February 06, 2017 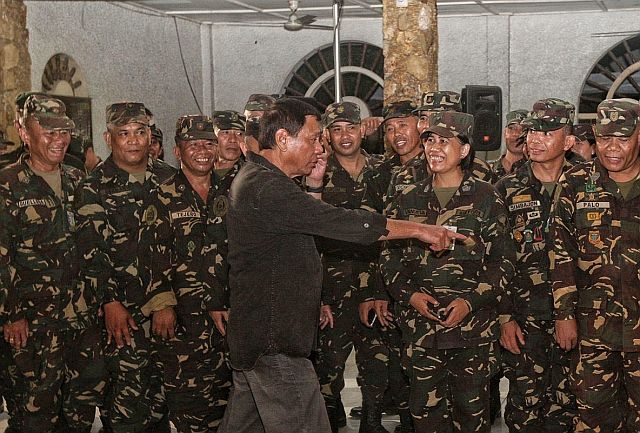 MANILA — The Armed Forces of the Philippines is ready to comply with President Duterte’s decision to authorize the military to help the Philippine Drug Enforcement Agency in the government’s campaign against illegal drugs.

Marine Col. Edgard Arevalo, AFP public affairs chief, said the military has only been waiting for the guidelines from Malacañang sought by Defense Secretary Delfin Lorenzana regarding the exact role of the military in the anti-drug drive.

“We are thankful to the President for his trust. We will not fail him. We will do the duty that he entrusted to us,” Arevalo said in a radio interview.

Law enforcement is not the soldiers’ main competency so those deployed in the war on drugs would have to be retrained, according to Arevalo.

The military has only been limited to a “supporting role,” with other agencies such as the Philippine National Police, National Bureau of Investigation and PDEA leading the anti-drug operations, Arevalo said.

“But whatever the guidelines will be, if we’re asked to undergo training, we will do it,” he said.

Last week, Duterte stopped the PNP and the NBI from conducting further anti-drug operations following the involvement of some of its officers in a bogus anti-drug operation in which South Korean businessman Jee Ick-joo was kidnapped and murdered for his money.

Jee was said to have been killed right inside the PNP headquarters in Camp Crame and later cremated in a Caloocan City funeral parlor. Several policemen and NBI assets were later charged before the Department of Justice and the court.

Duterte ordered the PNP to conduct “internal cleansing” to weed out rogue officers from the police ranks.  SFM/rga