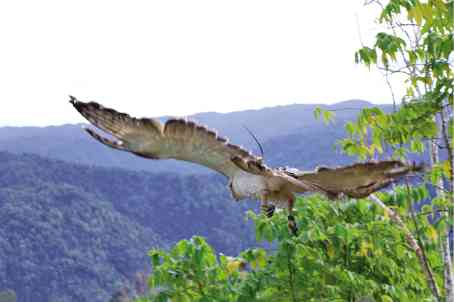 Philippine eagle Sarangani Pride flies to its freedom in Mt. Busa after recuperating from a pellet wound in the stomach. —PHOTO FROM SARANGANI INFORMATION OFFICE

MAITUM, Sarangani—It took a Philippine eagle that had recovered from its wound to show the need to protect the forests of a mountain in the province that is not only home to the endangered bird but other species of animals as well.

When the eagle, christened Sarangani Pride by Sen. Manny Pacquiao, was released back to the wild on Jan. 31, a local official said it showed the need to protect Mt. Busa, home to the eagle and other endangered species.

When it was time to release Sarangani Pride, the bird just stayed in its cage for at least 15 minutes, according to Beth Ramos, municipal information officer who witnessed the eagle’s release.

The bird, estimated to be a year old and technically still an eaglet, had to be coaxed to leave the confines of its cage and enjoy its freedom in the mountain, its natural habitat, Ramos said.

Ramos said the bird finally flew out of the cage around 8:44 a.m., perching on a tree a few meters away and staying there briefly, adjusting its wings.

A few minutes later, Sarangani Pride disappeared into the wild.

Sarangani Pride had been wounded and found limping on Jan. 2 by a farmer, who reported his discovery to local officials.

The officials immediately called for help from the Philippine Eagle Center (PEC) in Davao City, which sent veterinarians over.

The vets found the bird severely dehydrated and malnourished. X-ray results showed a pellet embedded in its stomach.

PEC vets found the wound already healing, however, and the bird needed just food and water to fully recover.

Sarangani Pride spent a month at PEC to fully heal.

Dennis Salvador, PEC director, said PEC personnel decided to release the eagle back into the wild when it was well enough to fly.

“We released it on the basis of its health and physical conditions,” Salvador said. “It is basically doing okay.”

But a team of biologists was tasked with monitoring the bird’s health for 10 days to help ensure that it survives.

Emma Nebran, executive director of the Environmental Conservation and Protection Center, said the area in Tuanadatu, Sitio Lahac, where the bird was found, already forms part of Mt. Busa, a known biodiversity area in Sarangani province.

Mt. Busa covers an area of 114,000 hectares, straddling the towns of Kiamba, Maitum and Maasim.

“To protect this eaglet and its parents, the local government has to make people aware of the need to protect the eagles and the environment,” Salvador said.

“(The local government should also) show that it has the political will to enforce the laws of the land,” he added.

Gov. Steve Chiongbian pledged funds for the protection of Mt. Busa, where other endangered species, such as tarsiers, wild deer, pigs, monkeys, bats and civets, thrive.

Despite reports of rampant illegal logging, the presence of an eagle showed a thriving wildlife here, said Mayor Alexander Reganit.

“This only proves that Maitum still has a thick forest that we ought to preserve and protect,” Reganit said. —ALLAN NAWAL