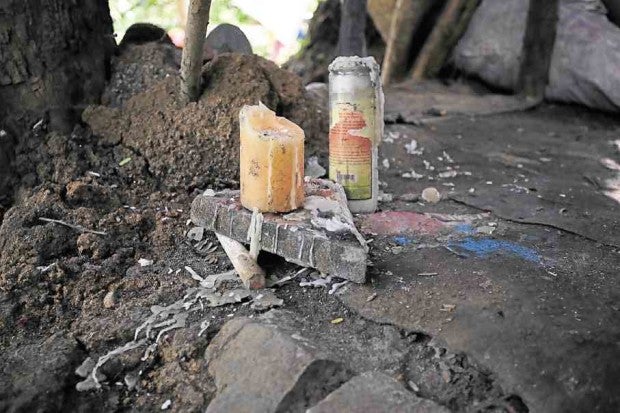 Candles mark the spot where Marcelo Daa Jr. was shot dead in an antidrug operation by the Quezon City police on Aug. 21, 2016.

It was in the early 2000s when Maribeth Bartolay first saw the man she would eventually start a family with.

She was standing by the road in Payatas in Quezon City, a slum area that grew around the dump that takes in Metro Manila’s refuse. On top of a passing garbage truck, a young scavenger named Marcelo Daa Jr. saw Maribeth and, with a simple wave of a hand, started their love story.

In the 15 years that followed, the couple have made a home out of a patchwork of plywood, iron sheets and tarpaulin in a forested area in Payatas, practically isolated from the city.

Last week, the Daa family’s ramshackle house became the epicenter of a “protected area,” thanks to a Supreme Court ruling that acted on an incident five months ago that turned Maribeth into a widow.

Daa and three other Payatas residents—Raffy Gabo, Anthony Comendo and Jessie Cule—were killed by members of the Quezon City Police District (QCPD) in an operation against suspected drug pushers. A fifth target, Efren Morillo, miraculously survived the raid despite being shot.

Morillo lived to tell the tale that would become the basis for a petition he and the grieving families of Daa, Gabo, Comendo and Cule filed in the high court, asking it for protection through the writ of amparo.

Filed on Jan. 26, the petition posed the first legal challenge to the Duterte administration’s bloody crackdown on the narcotics trade that has so far claimed 7,000 lives.

The petitioners, including Maribeth, told the Supreme Court that they continued to be harassed by the QCPD members who kept returning to their neighborhood after the August 2016 operation. They asked for the suspension of Oplan Tokhang—the police antidrug campaign—particularly in their neighborhood in Area B, Payatas, and all areas under the jurisdiction of the QCPD-Batasan station.

On Jan. 31, or just five days after the filing, the high tribunal granted the writ of amparo to Morillo, Maribeth and seven other petitioners. It prohibited the police from entering an area within one kilometer from their homes or workplaces.

But Maribeth was not exactly in a celebratory mood when the Inquirer met her on Saturday.

“Even with the writ of amparo, my fear has never left,” she said. “The police have weapons, guns. We have nothing else to protect us,”

The spot where her husband Marcelo and the others were killed, she said, was just a few steps away from her house.

What happened there on Aug. 21, 2016, remained crystal clear in her memory. That afternoon, Daa and his four friends were playing pool, killing time before they start their nightshift as garbage collectors, when five men and two women in civilian clothes arrived.

Carrying bayong (straw bags), the strangers appeared to be cockfighting aficionados who just ventured into their area, she said. But they suddenly handcuffed Daa and the others and ordered Maribeth and the other adults and children to leave.

Phones, jewelry taken
According to the petition, the armed men were actually policemen who also went on to ransack Daa’s home, taking cell phones and Maribeth’s silver necklace and rings. They then dragged the men to the back of the house, ordered them to kneel and shot them one by one.

Morillo was the first to be shot—but he played dead and managed to crawl toward a ravine and escape. Daa was shot in the chest and head.

“Some of the children here saw how they were shot one by one,” Maribeth recalled, pointing to the trees where the youngsters hid.

After the killings, she said, the armed men even took the time to eat and grabbed some cigarettes and drinks from her small sari-sari store, and waited there for three hours until other policemen—and policewomen—arrived; this time, the new arrivals were in uniform.

“I wanted to rush to my husband but they prevented us from coming close,” Maribeth said. “They told us they they shot back at them, nanlaban. But we have no guns!”

The official police report on the Payatas incident said the QCPD recovered firearms—two .45-caliber and two .38-caliber pistols—and sachets of suspected “shabu” from the suspects.

Maribeth admitted that her husband used illegal drugs from time to time. “His job requires him to work long hours and he used them to stay awake,” she said.

“But they should not have killed him. I thought President Duterte just wanted drug users to be jailed or sent to rehabilitation centers,” she said. “Not like this.”

The petition cited at least two incidents when the same police officers involved in the Aug. 21 operation returned to the area, entered the petitioners’ homes, and asked intimidating questions.

The Center for International Law (CenterLaw), which provided counsels to the petitioners, said the high court’s swift action on their case was unprecedented.

“It is really Efren Morillo who gave the courage to the petitioners to continue with the case,” it said in a statement. “We have a survivor who is not scared to speak the truth about what happened.”

CenterLaw said the Philippine National Police should recognize the power of the courts and respect its decision on the petition. “If the police violate the protection order, then we can ask the court to cite them in contempt.”

Though living in fear, Maribeth wants to remain positive that justice can be attained.

“But sometimes, it does not feel like a victory. No one looks out for us,” she said. “What if (the killers) just order someone else to shoot me or my three children?”

After her husband’s death, Maribeth left Payatas and lived elsewhere; she decided to return in December. “But I refuse to talk to anyone anymore. I don’t know who is on our side.”

To this day, she lights candles at the house to mark the spot where her husband—the life partner who first saw and flirted with her from a dump truck—was killed./rga

Read Next
No Mindanao posting, just ‘retraining’ for 387 cops with pending cases
EDITORS' PICK
San Mig Light celebrates its 20 years in Poblacion
No arrest yet of motorcycle taxis despite termination of pilot run
Senators think TWG’s move to axe motorcycle taxi pilot run an act of ‘revenge’
Ex-aide of Imelda Marcos is New York’s No. 2 tax cheat
‘A greener, cleaner tomorrow’: A how-to guide for Filipinos who want to help with today’s energy crisis
Motorcycle taxis ‘illegal’ starting next week — LTFRB board member
MOST READ
Palace: Crisis over ABS-CBN franchise unlikely
ALI bares facts on Technohub deal: P4B in lease to UP, P171, not P22, per square meter per month
Marcos monument beside Aquino’s stirs Tarlac town
‘Hindi pinag-isipan,’ Poe says of ban on motorcycle taxis
Don't miss out on the latest news and information.