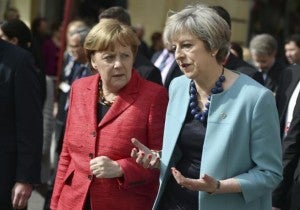 British Prime Minister Theresa May (center right) speaks with German Chancellor Angela Merkel (center left) as they walk during an event at an EU summit in Valletta, Malta, on Friday, Feb. 3, 2017. European Union heads of state and government gathered Friday for a one-day summit to discuss migration and the future of the EU. (Photo by RENE ROSSIGNAUD/AP)

VALLETTA, Malta — European Union leaders on Friday vowed to remain united and defiant in the face of an onslaught of criticism from the new American president that has started to undermine the once-unshakeable trans-Atlantic relationship.

And they hit back in an increasingly grating battle of words, underscoring how they fear that Donald Trump’s campaign rhetoric will be turned into policy and further tear apart their troubled bloc.

This week EU chief Donald Tusk moved the US into a “threat” category for the EU, following several negative comments about the 28-nation bloc.

“Maybe the best evidence that we are together in this context was the fact that some of my colleagues have used a new nickname for me, spontaneously, which is ‘our Donald’,” Tusk said Friday at an EU summit in Malta, highlighting the new divisions in the century-old alliance with the US.

French President Francois Hollande said it was unacceptable that Trump could put pressure on the EU through his declarations. And Lithuanian President Dalia Grybauskaite pointed out that it was almost impossible to build a bridge with Trump because “today we’re communicating with the United States mainly on Twitter.”

Austrian Chancellor Christian Kern said that “Trump must be judged by his actions and not by his rhetoric and his election campaign. But now he has delivered enough actions that are worrying.”

“What has happened in the last few days are really not the values I’m fighting for,” Kern’s Luxembourg counterpart, Xavier Bettel, said.

Trump has questioned the NATO alliance linking North America and Europe, calling it “obsolete,” and hopes for a major EU-US trade deal have already taken a deep dive amid worries of new US protectionism under the Trump slogan “America first.”

Adding insult to injury, Trump called the British decision to leave the EU – the most cathartic event in the bloc’s 60-year history – “a tremendous asset and not a tremendous liability.”

For France and Germany, there is only one solution to facing an unpredictable partner.

“Many countries have to realize that their future is first in the European Union, rather than who knows what bilateral relation with the United States,” said Hollande.

German Chancellor Angela Merkel said “the more strongly we are clear about how we define our role in the world, the better we can tend our trans-Atlantic relations.”

Italian Premier Paolo Gentiloni saw a “great opportunity” for the EU if the Trump administration turns out to be largely domestic-focused, leaving the way open for Europe to be what he called the “No. 1 trade superpower in the world.”

“The question the EU must pose itself is – can it play a more relevant role than what it’s has played up till now internationally?” Gentiloni said, adding that included being more engaged in defense.

He said an EU summit in Rome next month could be the occasion to rise to the challenge.

And even if Gentiloni said trans-Atlantic relations would survive, it didn’t take away the worries that have been increasing by the day since Trump took office on Jan. 20.

Even though Trump has spoken on the phone with Merkel, Hollande, Tusk and hosted British Prime Minister Theresa May in Washington, Europe keeps searching for how to understand the new American leader.

As much as some leaders and diplomats are saying that the cornerstones of the EU-US relationship remain intact, the bad vibes are seeping through the ranks of the EU’s member states.

On Friday, the Portuguese parliament voted to condemn Trump’s US travel ban on Muslims and highlighted the United States’ important role in promoting tolerance and human rights.

In Sweden, Deputy Prime Minister Isabella Lovin posted on Facebook a photo of her signing the country’s new climate law while surrounded by seven female staff members. Swedish media noted it resembled photos of Trump in the Oval Office surrounded by only male advisers. –Raf Casert and Frances D’Emilio

Geir Moulson and Frank Jordans in Berlin and Lorne Cook in Brussels contributed.