2 civilians killed in Manay town as ceasefire with NPA ends 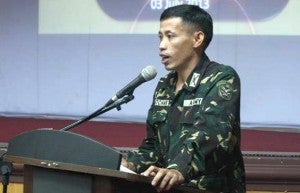 Two civilian have been killed since the collapse of the ceasefire between the government and the NPA ended, according to Capt. Rhyan Batchar, spokeperson of the 10th Infantry Division. (Photo from the Facebook page of Rhyan Batchar)

TAGUM CITY — Two civilians have died as violence flared up again in Mindanao since Wednesday following the collapse of the ceasefire that had been declared separately by the government and communist rebels, the Philippine Army’s 10th Infantry Division said on Friday.

Over 3, 000 families have also been displaced in the renewed hostilities, particularly in Manay, Davao Oriental, where New People’s Army (NPA) rebels killed a junior Army officer in an ambush.

Capt. Rhyan Batchar, 10th ID spokesperson, identified the dead as Ruben Inidio-an and Boy Sumambot, who were shot by suspected NPA fighters as the victims were fleeing to Barangay Lambog on the afternoon of Wednesday.

That was after rebels waylaid a joint team of soldiers and police officers sent out to investigate the reported presence of armed men there.

Among those killed in the ambush was 2nd Lt. Victor Alejo.

The Manay municipal government had created a crisis management committee to address the plight of at least 3,286 families from six barangays who evacuated out of fear, according to Batchar.

Also on Wednesday, three unarmed soldiers assigned with the 8th Infantry Battalion were captured and killed by suspected NPA rebels in Malaybalay City, Bukidnon, according to Major. Ezra Balagtey, spokesperson of the military’s Eastern Mindanao Command.

The troopers were heading back to their post in Manalog village on motorcycles after getting their subsistence allowance from the battalion headquarters when they flagged down and abducted at gunpoint by NPA gunmen in Kibalabag village, Balagtey said.

The bodies of the slain soldiers were found by villagers by Wednesday afternoon, with dozens of gunshot wounds each. /atm