Hitler’s ‘device of destruction’ telephone to be auctioned 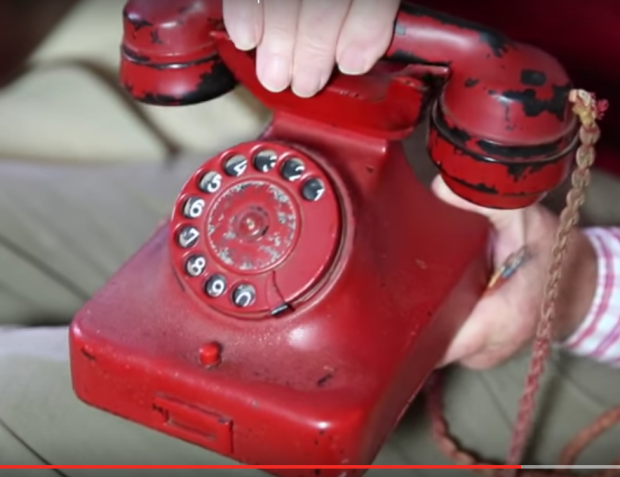 “Hitler’s mobile device of destruction” will be up for auction. Screen grab from Youtube/Bill Panagopulos

Adolf Hitler’s telephone, which he used to bark out orders leading to millions of deaths, will be up for auction in the United States later this month.

The seemingly innocent device—which historians describe as “arguably the most destructive ‘weapon’ of all time”— is expected to fetch as much as $300,000 (almost P15 million), according to a CNN report.

Originally recovered by British officer, Brigadier Sir Ralph Rayner in 1945 after the Nazi leader’s suicide in ‘Fuhrerbunker’ beneath Berlin,  “Hitler’s mobile device of destruction” was then passed on to his son, Ranulf Reyner in 1977.

“My father didn’t see it as a relic of Hitler’s glory days, more a battered remnant of his defeat, a sort of war trophy,” the 82-year-old was quoted as saying in the report. “He never thought it would become an important artifact.”

The black Bakelite phone was originally made by German conglomerate company Siemens, and was later painted red. The feared dictator’s name is also engraved on the back of the phone, along with symbols of an eagle and swastika.

The auction house, meanwhile, described the scorched phone as “virtually unequalled in historical importance” in its catalog.

Furthermore, Rayner detailed the disturbing details of how his father came to grips with the harrowing device inside a “dreadful hellhole.”

“He could still smell burning flesh,” he said, recalling his father’s description of the underground shelter where Hitler spent his final days.

Aside from Adolf Hitler’s phone, auctioneers are also putting on sale a dog statue made by slave laborers at Dachau concentration camp, and gifted to Hitler by his trusted military commander, Heinrich Himmler.

“It’s a pretty nasty thing, just as sinister as the phone,” Rayner said of the artifact.

Rayner, who held both items for the past 40 years, said he hopes the objects will be bought by a museum, instead of a private collector.

A YouTube clip of Reyner describing the historical phone is available below. Khristian Ibarrola/rga

Read Next
NBI halts war on drugs
EDITORS' PICK
Metro Manila’s COVID-19 cases on downward trend, but surge not over — OCTA
House energy committee chair Arroyo bats for cheap electricity
Unleash the photographer in you this World Photography Day with vivo smartphones
Look Through: The fate of impounded stray dogs
Palace warns sugar hoarders after raid on Pampanga warehouse
What to watch out for when selecting a video surveillance solution
MOST READ
LOOK: Miel Pangilinan dazzles in glittery pre-debut shoot
DOJ indicts bank officer in $2.1 billion Wirecard fiasco
PNP bars US legislators’ visit to De Lima due to lack of authority from court
Palace warns sugar hoarders after raid on Pampanga warehouse
Don't miss out on the latest news and information.