In Syria's ravaged Aleppo, few answers on how to rebuild | Inquirer News

In Syria’s ravaged Aleppo, few answers on how to rebuild 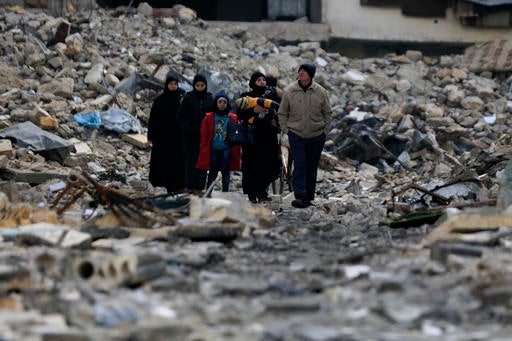 In this Jan. 20, 2017 photo, residents walk through the rubble of the once rebel-held Ansari neighborhood of eastern Aleppo, Syria. (AP Photo/Hassan Ammar)

ALEPPO, Syria — Aleppo has been scarred beyond recognition: Weeks after fighting stopped, a pall of dust covers its eastern districts, where streets are lined for blocks with buildings smashed to metal and brick rubble in scenes reminiscent of cities devastated in World War II.

The destruction is the worst wreaked on any city in Syria’s six-year war. No one has any quick answers on how to rebuild Aleppo, Syria’s largest city, much less the rest of a country that has seen appalling desolation.

Costs for reconstruction in Aleppo, once Syria’s economic hub, could run in the tens of billions of dollars, far beyond the country’s capabilities. Western nations are unlikely to give funds to the government of President Bashar Assad, which remains under U.S., European, and Arab sanctions that bar aid. Even Assad’s allies, Russia and Iran, which are bankrolling his rule, show little enthusiasm to shoulder rebuilding costs.

And there is the question of how to discuss reconstruction while the war still rages. Much depends on the shape of any eventual political settlement ending the war. Rebuilding without a deal may only entrench demographic changes caused by the war — which have run along sectarian lines. The fear among some is that Assad’s government will rebuild opposition areas like east Aleppo for its supporters and do little to draw back millions of refugees, most from parts of the country that joined the rebellion.

Still, the European Union, where nearly 1 million Syrians are seeking asylum, says planning must start now. It wants to host a conference in the spring on the future of Syria with a focus on reconstruction. U.N. officials are scrambling to form a vision for a future Syria and find ways to tackle financing.

“I remember people were telling us, ‘Are you mad? You start planning for rebuilding now?’ And my reaction was, ‘It is already too late,'” said Abdullah Al Dardari, deputy executive secretary for the U.N. Economic and Social Commission for West Asia.

“One day soon, hopefully, when there is a peace agreement of some sort and we need to deliver to the people of Syria on basic services and housing and schooling and all this, you will see how much time we really needed for planning.” 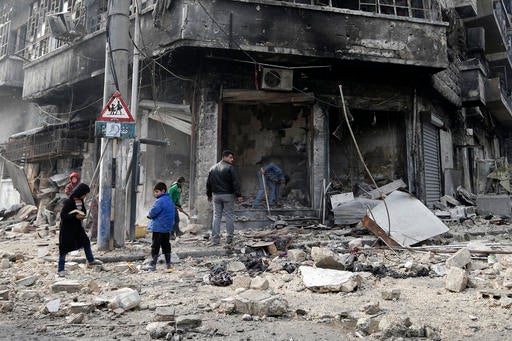 The EU move may in part be aimed at gaining a voice in Syria — and a carrot of reconstruction aid to dangle before Assad — at a time when Moscow dominates the political process. Russia’s warplanes helped Assad’s forces recapture east Aleppo, the government’s greatest victory of the war, and now Russia along with opposition-backer Turkey is pushing to jumpstart negotiations.

A comprehensive political solution remains far off. But any settlement in current circumstances would no doubt leave Assad in office and therefore running rebuilding efforts.

Al Dardari estimated war damages across Syria so far at $350 billion, including physical damage amid loss of economic activity. Aleppo’s share is about 15 percent, or over $52 billion, he said, though others put the estimate at nearly double that.

“The economic damage is beyond calculation at the moment,” Al Dardari said, who later this month will move to the World Bank as an adviser on reconstruction efforts in the Middle East. “There is no number on earth that can be put on the loss (of) the historical, archaeological and cultural and also the business aspect of it.”

Since 2012, Aleppo was divided between a government-held west and opposition-held east, with constant battling between the two sides. The east bore the brunt, under bombardment by government artillery, airstrikes and helicopter-dropped barrel bombs. The Russian-backed siege last year brought months of intense barrages until the rebel enclave collapsed in December.

Eastern Aleppo, home to nearly 1.5 million before the war, now lies largely empty. While theoretically residents are allowed to return, many will not in the absence of a reconciliation deal, fearing retaliation or military conscription.

Still, dozens of residents have filtered in to inspect their properties, climbing over debris to reach hollowed-out, punctured buildings with unexploded ordnance littered around. Entire apartment blocks are now rubble. Vehicles can’t move through most streets because of debris and bomb craters.

During an Associated Press tour in January, a body — likely of a rebel fighter— still lay outside a bombed hospital. Rebels’ graffiti was covered over with black paint, adding to the haunted feel of streets largely empty of life.

In the city’s center, the historic old quarters — which were largely held by the opposition and stood on the dividing line — are a wrecked shadow of their glorious past. UNESCO estimated that 60 percent of the old city has been severely damaged and 30 percent destroyed. Among the casualties are the heavily damaged centuries-old Umayyad Mosque and historic bazaar.

“My heart burns every time I come to the market and see the destruction. I cry every day but there is nothing I can do,” said Abdul-Qadir Homsi, owner of a shoe shop. Inside his shop, three cylinders — perhaps homemade bombs — nearly blocked the door.

“I informed the authorities two weeks ago but so far they have not come to remove them.” 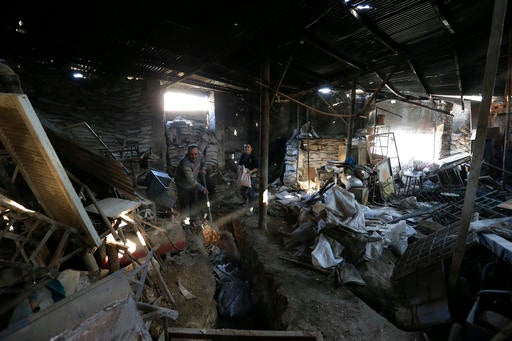 In this Jan. 20, 2017 photo, Syrians fill a tunnel used by rebel fighters with sand, inside their family’s shop in the once rebel-held Bab Antakya street, in eastern Aleppo, Syria. (AP Photo/Hassan Ammar)

Mohammed Saddour, who sold carts, found his shop had been used by rebels as an operations room near the front lines. He spoke as workers poured sand into a fighters’ tunnel underneath his shop. He estimated he would need $1,200 to get the shop running plus $800 for a generator — an amount that the 52-year-old merchant can’t afford.

“The economic cycle in Aleppo will not start unless the big and small business owners begin working. If they don’t start, it will not resume,” he said.

On some streets, municipal workers were fixing electricity poles, a sign of the first steps by Syrian authorities.

The government says its priority is to rebuild infrastructure with a goal of reviving Aleppo’s industries and businesses, said Abdul-Qadder Azzouz, an economy professor at Damascus University. That alone could cost an estimated half billion dollars, he said.

At the top of the list is getting the city’s airport working again as well as water and power facilities. Authorities may try to quickly rehabilitate the east’s Sheikh Najjar industrial zone, Azzouz said.

The most pressing challenge is to bring home the people of Aleppo and other cities, said AlHakam Shaar, a 30-year-old Aleppan who fled soon after the war began to avoid the draft and now lives in Budapest. That is unlikely to happen without a peace deal.

“Any rushed reconstruction is dangerous and is likely to cut out the owners or the ex-residents as well,” said Shaar, who is a member of the “Aleppo Project,” a team documenting the city’s recent history.

International officials are informally discussing whether to pursue country-by-country reconstruction or a regional Marshall Plan-type project.

But the money being discussed currently is “small, incremental,” suitable for some stabilization projects but not reconstruction on a scale “that is going to bring 12 million displaced people back to their homes,” said a Syrian urban planner who is aware of the discussions. He spoke about the behind-the-scenes talks on condition of anonymity. 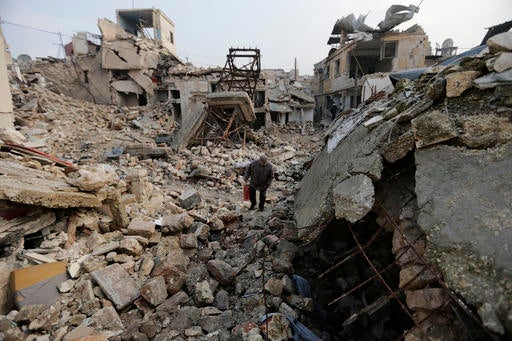 FILE — In this Jan. 20, 2017 file photo, a resident walks amid the rubble in the once rebel-held Jalloum neighborhood of eastern Aleppo, Syria.  (AP Photo/Hassan Ammar, File)

Officials in Russia — in the midst of a two-year recession — have not commented on rebuilding. Moscow may instead encourage companies and other entities to lend support. Russia’s province of Chechnya said it will help restore Aleppo’s Umayyad Mosque.

With no overall peace deal, Turkey, a major ally of the opposition, may take a role in reconstruction in areas under its sphere. It has begun restoration work in Jarablus, a town captured in the campaign its military has waged alongside Syrian fighters against the Islamic State group and the Kurds in northern Syria.

Without a large-scale campaign, rebuilding will likely come through financing smaller, local efforts.

In Beirut, the U.N. and Italy’s University of Venezia organized a gathering of Syrian architects and artists with others from Europe to put together a “Sketch for Syria.”

They brainstormed ideas, including using energy efficient methods, recycling scrap metal from destroyed buildings, and speeding construction so that residents can move back into homes while building continues on upper floors. They drew up proposals for decentralizing governance.

Luna Rajab, a Damascus architect and the coordinator of the project, said the focus is on Syria’s future, not the conflict.

“We are not forgetting there is a war,” she said. “But I can choose to sit under the ruins and ashes or I can choose to climb on top of the mountain and scream as loud as I can: ‘I want to rebuild.”/rga