Escudero: Aguirre not yet off the hook in BI bribery scandal | Inquirer News
Close
menu
search

Escudero: Aguirre not yet off the hook in BI bribery scandal 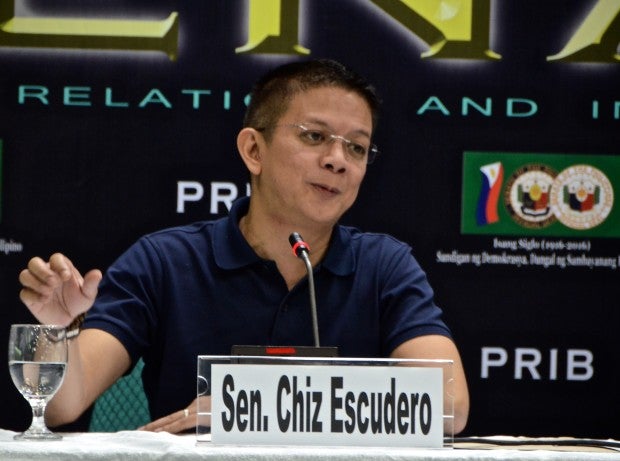 Senator Francis “Chiz” Escudero said he is not yet convinced that Justice Secretary Vitaliano Aguirre II had nothing to do with the P50-million bribery scandal at the Bureau of Immigration (BI) even after some of those allegedly involved had already cleared him.

“Ang nag-clear pa lang sa kanya si Ginoong Sombero pero hindi pa ako nakahandang gawin yun (Only Mister Sombero has cleared him, but I’m not yet ready to do the same),” Escudero said during the Kapihan sa Senado on Thursday.

During Tuesday’s hearing of the Senate blue ribbon committee, Aguirre claimed that Sombero sent him a text message “clearing” him of any knowledge on the “extortion scandal.”

But Escudero said he does not believe that the Justice Secretary was off the hook just because Sombero said it so. He said he wants Sombero to face the committee so they could scrutinize and examine him.

The senator then cited some lingering questions that he thinks Aguirre had not sufficiently answered when he testified at the Senate.

Aguirre, who appeared twice in the Senate probe, admitted that he agreed to meet with Lam and Sombero at the Shangri-La hotel in Taguig last November 26 to discuss the arrest of Chinese workers since he was also attending an awarding ceremony in the same venue. Also present during the meeting were Lam’s two interpreters and Argosino.

Escudero also asked why Aguirre would delegate Argosino to face Lam, instead of BI Commissioner Jaime Morente and why the Justice Secretary had instructed Sombero to just talk to the two former immigration officials and not to former BI Intelligence chief Charles Calima.

“So hindi pa ako masyadong kumbinsido dun pero nasa kay Robles at Argoisno yun kung aamin sila at ituturo nila kung sino ba talaga, kung meron mang nag utos sa kanila (So I’m not yet convinced on that but it depends on Robles and Argoisno if they will admit and point to anyone who ordered them),” he said.

The senator said Aguirre’s lability would depend if Robles or Argosino would eventually point to him as the one who ordered them to receive money from Sombero.

Escudero nevertheless believes that Aguirre committed “indiscretion” when he agreed to meet with Lam and Sombero outside his office.

“That is clearly indiscretion on his part, which he should have not done,” he said.

The senator also questioned Aguirre’s claim that he was not aware of the amount being offered by Lam’s camp and that the P50 million to P100 million that he mentioned in an interview was just his own estimate.

Still, the senator said he would want to see the whole picture before making any conclusions.

“The committee can make recommendation in so far as any criminal and or administrative sanctions that can be imposed on them but bear in mind, he’s (Aguirre) an alter ego of the President. Only the President can administratively sanction him, not the Senate,” he added. RAM