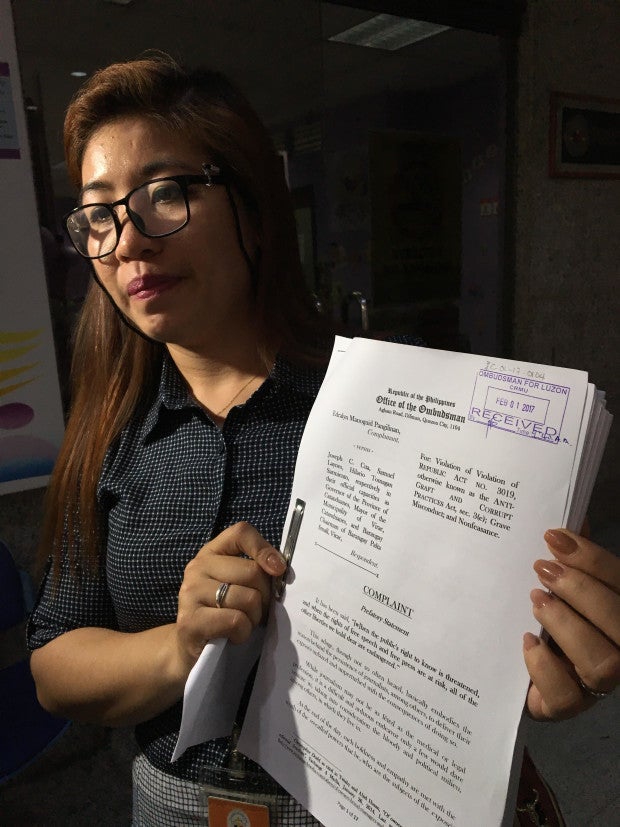 MANILA — Saying it was an attempt to seek justice, the partner of a slain newspaper publisher has sued the governor of Catanduanes and two other officials for allegedly failing to crack down on illegal drug operations on the island.

In her 17-page complaint before the Office of the Ombudsman, Pangilinan claimed that the three “allowed the proliferation of dangerous drugs” in the island province by way of their “gross inexcusable negligence.”

This allegedly led to unwarranted benefits for the owners of a clandestine drug laboratory raided in Barangay Palta Small, Virac, on Nov. 26, less than a month before Que was shot in the head by a motorcycle-riding gunman on Dec. 19.

The existence of the laboratory allegedly caused undue injury to the government in violation of Section 3(e) of the Anti-Graft and Corrupt Practices Act.

Virac and its Barangay Palta Small are small geographic units with small populations that “are quite easy to regulate and supervise,” according to Pangilinan.

Pointing out thata a establishment as big as the laboratory would have required permits and compliances with the local government, she  faulted the officials for their “utter failure” to suppress the drug trade.

“There can be no question that Gov. Cua, Mayor Laynes, and Barangay Chairman Sarmiento deliberately turned a blind eye on the operations of the clandestine drug laboratory in Barangay Palta Small,” the complaint read.

Notably, Que was a mayoral candidate who lost to Laynes during the May elections.

While the complaint revolved mostly about the alleged failure to stem the illegal drug trade, Pangilinan stated in the background that Que “investigated” the issue and published Catanduanes News Now’s maiden issue dated Dec. 13-19.

Que would not be able to publish a second issue containing what the complaint called his “ultimate exposé” and “last hoorah.”

The planned article, which was found by Pangilinan and quoted in her complaint, was titled “Backgrounder on the history and involvement of Governor Joseph C. Cua of the province of Catanduanes in illegal drugs.”

Pangilinan stated in her complaint: “His exposés, unfortunately, went under the skin of one of his subjects, Joseph C. Cua, the governor of Catanduanes province, and were too much to handle for the latter. Larry was thus slain to finally silence him.”

In an interview with reporters, she said she wanted to “give him justice for his death.”

But, she admitted that she could not definitively implicate Cua and the other officials for her husband’s murder.

“Hindi ko naman dini-direct to the point kung may nalalaman o wala (I’m not going direct to the point about their alleged knowledge of the crime),” she said. “Wala po akong matibay na ebidensya kaya hinihingi ko na lang na imbestigahan nang maayos (I do not have strong evidence, so all I could ask for is a thorough investigation).”  SFM/rga