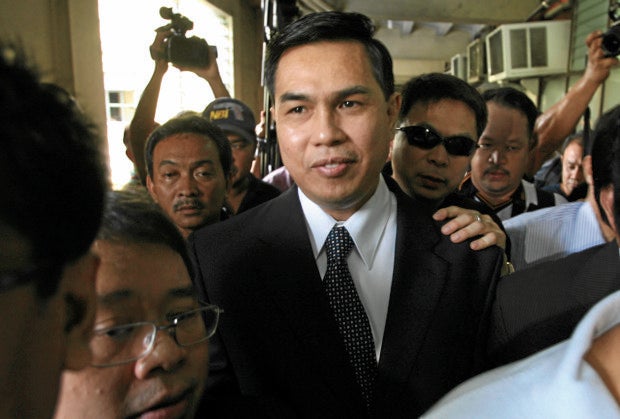 The Philippine National Police-Criminal Investigation and Detection Group (CIDG) is awaiting the decision of the Manila Regional Trial Court on where former Senior Supt. Cezar Mancao II, one of the accused in the Dacer-Corbito double murder case, would be detained.

Mancao surrendered on Monday to the CIDG-National Capital Region, according to its head, Senior Supt. Belli Tamayo.

The warrant of arrest was returned to the court on Tuesday morning, Tamayo told reporters.

In the meantime, Mancao will be detained at the CIDG-NCR office in Camp Crame, Quezon City, while awaiting the issuance of the commitment order.

“We can’t really tell how long he will be here because it’s the court’s decision on where to commit him. But as of now, for security reasons—because we can’t put him in any detention together with other suspects in drugs, [suspected members of the bandit group] Abu Sayyaf—he is in this office and is closely guarded,” Tamayo said.

Mancao, a former official of the defunct Presidential Anti-Organized Crime Task Force (PAOCTF), escaped from detention in the National Bureau of Investigation in May 2013, a few days after the Manila RTC ordered him transferred to the city jail.

The judge earlier denied the prosecution’s plea to discharge Mancao as a state witness in the Dacer-Corbito double murder case and the higher courts denied his demurrer or plea for the dropping of the charges against him.

Mancao was extradited from the United States in June 2009 and was tapped by the Department of Justice to testify against former President Joseph Estrada, former PAOCTF head and now Sen. Panfilo Lacson, and other suspects in the killing of publicist Salvador “Bubby” Dacer and his driver, Emmanuel Corbito.

Dacer and Corbito were abducted in November 2000. They were executed and their bodies burnt in Indang, Cavite.

In February 2015, Cezar Mancao secretly met with several journalists and told them about his plans to surrender. He also cleared Estrada and Lacson from the crime and offered to reveal all he knows about the murders.

Lacson said on Wednesday he had forgiven Mancao even if the latter had made his life “miserable” in the 14 months that he had to go into hiding in 2009 after being persecuted by the Arroyo administration.

The senator, who was cleared in the Dacer-Corbito murder case by the Supreme Court in 2010, said when Mancao was in hiding, the latter sent his mother, wife and sister to talk to him and that he had always said he had forgiven Mancao.