Criminals are not human – Aguirre 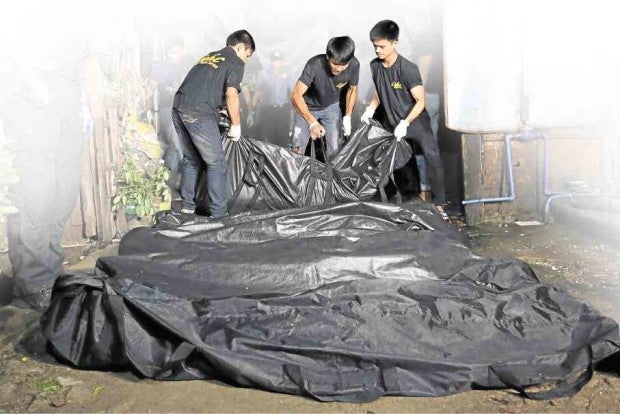 LATEST FOUR TO FALL Another night of body bags in Quezon City, this time in Barangay Tatalon as police step up drive against drug suspects and criminals. FILE PHOTO/RAFFY LERMA

Justice Secretary Vitaliano Aguirre II on Wednesday brushed aside accusations that police killings of thousands of drug suspects may be crimes against humanity, stating criminals were not human.

Amnesty International earlier in the day accused police of murdering defenseless people or paying others to kill as part of President Rodrigo Duterte’s drug war, and said the deaths may amount to crimes against humanity.

“In other words, how can that be when your war is only against those drug lords, drug addicts, drug pushers. You consider them humanity? I do not.”

Among a litany of alleged crimes, Amnesty accused police of shooting dead defenseless people, fabricating evidence, paying assassins to murder drug addicts and stealing from those they killed or the victims’ relatives.

It also said police were being paid by their superiors to kill, and documented victims as young as eight years old.

“The police are behaving like the criminal underworld that they are supposed to be enforcing the law against,” the report said.

Police have reported killing 2,555 people since Duterte took office seven months ago and immediately launched his war on crime, while nearly 4,000 others have died in unexplained circumstances, according to official figures.

Duterte has repeatedly made comments echoing similar sentiments to Aguirre’s, urging police to kill drug users as well as traffickers.

“Crime against humanity? In the first place, I’d like to be frank with you: are they humans? What is your definition of a human being” Duterte said in August last year referring to drug offenders.

“Human rights? Use it properly in the right context if you have the brains.”

The next month Duterte said he would be “happy to slaughter” three million drug addicts, and likened his campaign to Nazi leader Adolf Hitler’s efforts to exterminate Jews in Europe.

However the Philippine National Police and the presidential office issued statements on Wednesday rejecting many of the assertions in the Amnesty report.

“The PNP has always observed and upheld respect for human rights,” a police statement said.

He insisted only two percent of the police force was corrupt.

This was despite Duterte saying on Monday that the police force was “corrupt to the core”, with nearly 40 percent of all officers involved in graft, and ordered them to suspend their activities in the drug war.