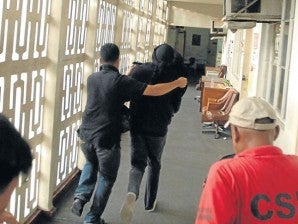 SIZZLING SIBLING WAR Ramon Joseph “RJ” Bautista, 18, younger brother of slain Ramgen Jose Bautista (a.k.a Ram Revilla), is led away by the police after his inquest at the Parañaque Prosecutors Office Tuesday. He was arrested early Tuesday in Bacoor, Cavite, for the killing of Ramgen. Police said they are also hunting four other suspects, including Ramgen’s sister, Ramona Belen Bautista. JIM GUIAO PUNZALAN

Disagreement over the P1-million monthly allowance from their father, former Senator Ramon Revilla Sr., appears to be the motive in the October 28 murder of Ramgen Jose Bautista (Ram Revilla in show biz), which was plotted by two of his younger siblings, according to police investigators.

The plot thickened for the show-biz-and-politics Bautista-Revillas, with the victim, suspect and witness-turned-suspect all in the same family, police said. Ramon Joseph “RJ” Bautista, 18, was arrested on the national highway in Bacoor, Cavite province, at around 11:30 p.m. on Monday and was tagged as the mastermind of the murder of Ramgen Bautista, 23.

RJ Bautista, a model and business administration student of Enderun Colleges in Taguig City, was arrested by police shortly after leaving the wake of his slain brother in the town of Imus. He was in a black SUV accompanied by “some siblings” when arrested, according to Senior Superintendent Billy Beltran.

Four other suspects, including his sister, Ma. Ramona Belen Bautista, 22, are being hunted, Beltran said.

Charges of murder and frustrated murder were filed Tuesday afternoon against RJ Bautista for the death of his brother and the wounding of the latter’s girlfriend, Janelle Manahan, who is still in critical condition in a hospital in Muntinlupa City.

The other suspects were identified as Norwin de la Cruz, one alias Bryan, and one alias Glaiza.

It was Ramgen Bautista, the eldest of the nine children of Revilla Sr. and Genelyn Magsaysay, who handled the P1-million allowance, police investigators told Radyo Inquirer.

Their mother has a separate allowance, the investigators said, adding that the money angle surfaced after Ramona Bautista’s earlier statement that she was abducted by the killers turned out to be “untrue.”

Part of the plan

In fact, the investigators said, Ramona Bautista was just in BF Subdivision in Parañaque City, where the family lives.

She was included in the charge sheet because it appeared that her previous statement that she was abducted by the gunmen after her brother’s murder and then abandoned in Las Piñas City was “part of the plan,” Beltran said.

“Investigation shows that the van abduction that Ramona claimed was just a cover-up, because three witnesses saw that [RJ] and Ramona left the subdivision gate [within] minutes of each other,” he said.

Beltran said that shortly before midnight on Friday, Ramona Bautista knocked on her brother’s bedroom door and pretended to borrow a video camera to give way to the waiting masked suspect wielding a gun fitted with a silencer.

“That’s why the house help and assistants at home did not hear any of the shots when it happened,” Beltran said.

There were 16 stab wounds and one gunshot wound in various parts of Ramgen Bautista’s body, according to the autopsy report. Manahan was stabbed twice in both sides of her chest and was shot in the jaw.

Police said RJ Bautista was identified as the mastermind by Roel Puzon, a witness who was part of the murder plot but not of the execution.

Altea and Tolisoro were arrested on Monday morning in San Dionisio, Parañaque. Along with RJ Bautista, they were taken at 2:30 p.m. Tuesday to the Parañaque Prosecutors’ Office, where the charges were heard by Assistant City Prosecutor Leah Roma.

Beltran said politics, love triangle and robbery had been ruled out as motives, with the new development pointing to the “personal” motive.

He said there appeared to be a financial feud among the siblings over their allowance.

Torred said the gunmen had been promised P200,000 for the killing but that they received only P19,000 as down payment to buy the gun.

“Our investigation showed that they conspired to kill Ramgen but didn’t succeed on their first try. The group met and rescheduled, which led to the murder on October 28,” Torred said.

Witness Puzon said the group had initially planned to stage the attack on October 12 but that Ramgen Bautista woke up and the murder had to be called off.

He said the group met again on October 14 and 17 and agreed to strike on October 28.

Beltran said the witness went to the police because he was “disturbed by his conscience” after hearing news of the murder. Police said Puzon’s statements corroborated the testimonies of their other witnesses.

Puzon said Altea was the assigned hitman. But police have yet to establish who shot Ramgen Bautista and Manahan on October 28 because the gunman was “masked.”

Revilla Sr., known to his family as “Don Ramon,” was taken to St. Luke’s Medical Center in Taguig City at 2:30 p.m. Tuesday.

The family’s spokesperson, Alde Pagulayan, said the former senator had been nursing a fever and elevated blood pressure since Monday night.

Pagulayan said family members were “shocked” by the tagging of RJ and Ramona Bautista as suspects.

“The family is distraught, shattered, shocked. We are dealing with a lot of things. First, we were grieving for Ramgen, then this came up. It’s just too much,” Pagulayan said.

“We call on Task Force Ramgen to make sure that the result of the investigation [would] not lead to irreparable damage to the innocent, especially to their family members,” the senator said, adding:

“We will not believe that he (RJ) had anything to do with it until it is proven beyond reasonable doubt.”

Revilla Jr. called on investigators to examine the “credibility” of the other suspects who had tagged RJ Bautista. “The statements should be validated, not taken on face value alone,” he said.

Revilla Sr., a former actor, is said to have fathered at least 80 children.

He had seven children with his wife Azucena, who died in 1998. They are Revilla Jr., Bacoor Mayor Strike Revilla, film producer Andrea Bautista-Ynares, and Marlon, Rowena, Princess and Diane.

In an interview last December, Revilla Jr. said he had met at least 40 of his half-siblings.

In 2007, Revilla Sr. left samples of his DNA with the National Bureau of Investigation so that anybody who would claim to be his child after he dies could be tested.

He said his daughter Andrea was keeping a list of his children, which at the time numbered “far less than 100.” With reports from Maricar Cinco, Inquirer Southern Luzon; Christian V. Esguerra in Manila; Inquirer Research