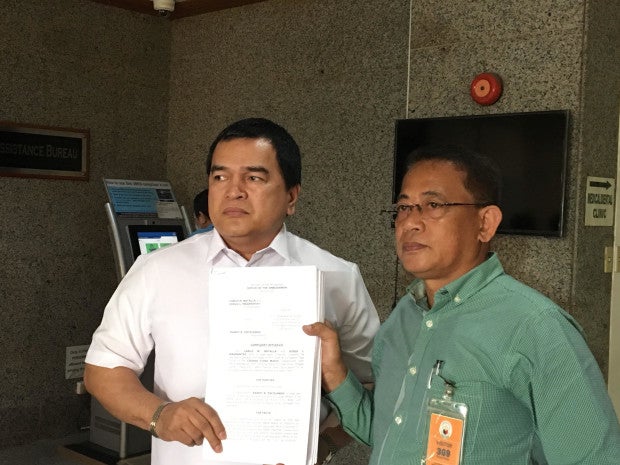 MANILA — An anti-corruption group has filed an administrative complaint against a high-ranking Subic Bay Metropolitan Authority official for performing duties outside his function as an officer-in-charge administrator in 2016.

Their 11-page complaint before the Office of the Ombudsman stated that Escolango issued 13 office orders on personnel designation and five memoranda on office policies from October to December last year. He also allegedly executed unspecified contracts and agreements on behalf of SBMA.

This was despite the fact that he was only designated by Executive Secretary Salvador Medialdea as an OIC.

According to the complainants, an OIC enjoys limited powers confined to ensuring that the office continues its usual activities and the power to appoint is not deemed delegated to a mere OIC.

“Here, respondent neither had the legal right nor the authority to issue the subject office orders,” the complaint read. “The OIC has no power to appoint unless the designation issued by the proper appointing authority includes expressly the power to issue appointment.”

Escolango allegedly committed malfeasance by “maliciously acting” as a duly appointed administrator, the complainants said. He was accused of grave misconduct for disregarding the established rules, as well as conduct prejudicial to the best interest of the service for tarnishing the integrity of the office.

In an interview with reporters, Magpantay said they would soon file a separate criminal complaint against Escolango for usurpation of official functions before the local prosecutor.  SFM

Read Next
UST responds to viral post on student bullied by UST office
EDITORS' PICK
Geek out at TOYCON 2022 powered by Smart Signature
UK’s Boris Johnson will resign, BBC reports
High inflation: Your P1 is now worth only 87 centavos
High-risk pregnancy: Reducing your risk is in your hands
Unemployment rate up to 6% in May
House energy committee chair Arroyo bats for cheap electricity
MOST READ
Suspect in grisly killing of missing woman in Bulacan arrested
Kim Atienza’s daughter flaunts bikini body in response to critics of her ‘revealing photos’
Cop slain in Isabela ambush
FDA probes popular Filipino noodle brand for ‘high level of ethylene oxide’
Don't miss out on the latest news and information.