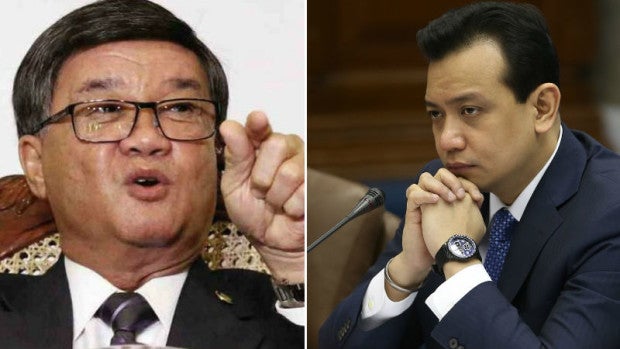 A “blessing in design” was how Justice Secretary Vitaliano Aguirre described Senator Antonio Trillanes IV’s absence on Tuesday at the resumption of the Senate probe on the alleged P50 million bribery scandal hounding the Bureau of Immigration.

Trillanes’ staff member said he is on official business in the United States.

“Mabuti na siguro ‘yun. ‘Yang tinatawag na blessing in design (I guess it’s for the better. It’s what I call a blessing in design),” Aguirre told reporters ahead of the resumption of the probe by the Senate blue ribbon committee.

“’Yan ay design na blessing by our Lord para siguro hindi na kami magkaharap, para hindi na kami magconfront, magkasakitan ng words (It’s a blessing designed by the Lord, so we do not have to face off and get into a confrontation and exchange hurtful words),” the Justice secretary added.

Trillanes earlier accused Aguirre of possible involvement in the P50-million bribery scandal, citing the latter’s alleged “holes” in his testimony when he first appeared the committee hearing last week.

The senator particularly questioned Aguirre’s admission that he had met with gambling tycoon Jack Lam, who had allegedly given P50 million to some immigration officials supposedly in exchange for the release of 1,316 illegal Chinese employees working for him at Fontana Leisure Parks and Casino in Clark, Pampanga.

The Justice Secretary also taunted Trillanes for claiming that he knew Lam even before the controversy as he worked as Vice President and Chief Legal Counsel of Clark Development Corporation (CDC) from March 2013 to June 2016.

“HIndi ko nga malaman kung saan n’ya kinuha ‘yan e sabi ko (I don’t know where he got that when I said it was) five months from March, third week ng (of) March to August 2013,” Aguirre said.

(Trillanes is a good researcher. But from where? I was curious where he gets his information. It turns out it’s from Wikipedia. If you look at my Wikipedia page, it was stated there “until June 30, 2016.)

Aguirre reiterated that he never knew Lam during the five months that he worked at CDC.