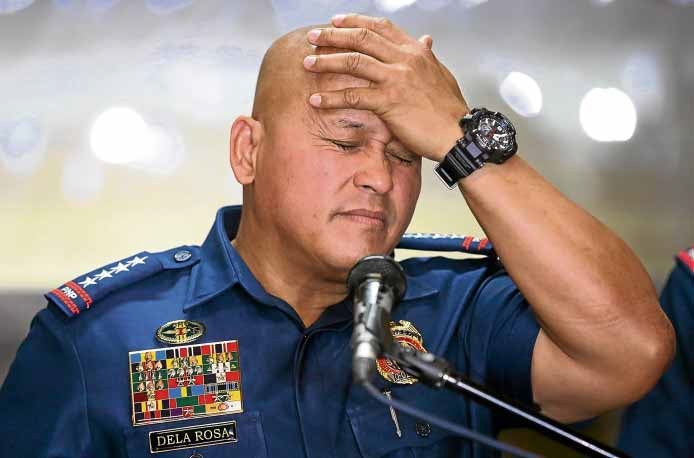 The chief of the Philippine National Police on Monday suspended controversial antinarcotics operations to make way for a cleansing of the ranks, after President Duterte admitted that the police force prosecuting his brutal war on drugs was “corrupt to the core.”

Speaking at a news conference at PNP headquarters in Camp Crame, Quezon City, Director General Ronald dela Rosa said Mr. Duterte gave the order to suspend the war on drugs at 3 a.m., after a series of scandals in which officers were caught committing murder, extortion and robbery while using the antinarcotics operation as cover.

The New York-based Human Rights Watch dismissed the suspension of the war on drugs as a public relations stunt, unless Mr. Duterte “seeks meaningful accountability” for the wave of drug-related killings unleashed after he took office seven months ago.

More than 7,000 people have been killed since the President launched the campaign after taking office at the end of June last year.

About 2,250 were killed during police operations. The remainder are under police investigation.

Dela Rosa announced the disbandment of the Anti-Illegal Drugs Group (AIDG), which was involved in the kidnapping for ransom and murder of a South Korean businessman last year.

At a news conference in Malacañang late Sunday, Mr. Duterte named the head of the AIDG, Supt. Rafael Dumlao III, as the mastermind of the abduction of Jee Ick-joo, who was taken from his home in Angeles City, Pampanga province, on Oct. 18 last year and killed inside PNP headquarters.

The killers demanded P5 million in ransom from Jee’s wife even though the businessman was already dead.

She asked the government for help, leading to an investigation that resulted in the discovery of the crime and the exposure of “tokhang for ransom,” the police kidnapping for ransom operation carried out under cover of Mr. Duterte’s bloody war on drugs.

“You policemen are the most corrupt. You are corrupt to the core. It’s in your system,” Mr. Duterte said as he railed against Dumlao.

The President said he would form a new interagency antinarcotics unit that would be headed by the Philippine Drug Enforcement Agency.

“This time, because of the sordid incident, let me reorganize the system,” he said. “Our enemies here are policemen who are criminals.”

On Nov. 5 last year, a group of policemen raided a jail in Leyte province and killed the mayor of Albuera town, Rolando Espinosa Sr., who was detained on drug charges. Another inmate was killed.

The policemen claimed Espinosa fought back to prevent a search of his cell and was shot dead, but a Senate investigation found that the killing of the mayor was “premeditated.”

At his news conference on Monday, Dela Rosa admitted a “breakdown of police discipline,” but said he was launching a cleansing process to restore professionalism in the ranks and regain public trust.

“Yes, I agree that there is a breakdown in police discipline, otherwise things like these would have not happened,” he said, referring to crimes involving officers.

Dela Rosa said Mr. Duterte had ordered a review of PNP records to determine how rogue officers who had been dismissed managed to return to the service. The review of the reinstatements and of scheduled reinstatements will be given priority, he said.

“I want to find out why they still come back. Do you want to change or do you want to make money again?” he said.

Dela Rosa said he had ordered the Directorate for Investigative Management, Internal Affairs Service and Directorate for Personnel Records Management to work together to produce a list of rogue officers who had been reinstated.

The PNP blamed the reinstatement of some dirty cops on the Regional Appellate Board (RAB).

The top cop admitted that the kidnapping and murder of Jee had shaken the PNP and undermined its gains in the war on drugs.

He said the suspension of the campaign was just “momentary” and would resume after the PNP had cleansed its ranks.

“To the drug lords: You have your day. This is your day. You may [have achieved] victory right now, but there is always a time for reckoning,” he said.

He said he was sorry for the good men in the AIDG who were affected by the dissolution of the group.

“Most of them are performing very well and I am very [sorry] that they were affected because of the foolishness of [a few bad ones],” he said.

Dela Rosa announced the formation of a counterintelligence task force that would oversee the purge of the ranks and “police the police.”

He said he would make sure the composition of the task force would be above par to avoid another black eye for the PNP.

Dela Rosa said he wanted to spend his remaining 11 months at the helm of the PNP restoring the good name of the police. —WITH REPORTS FROM MARLON RAMOS, THE WIRES