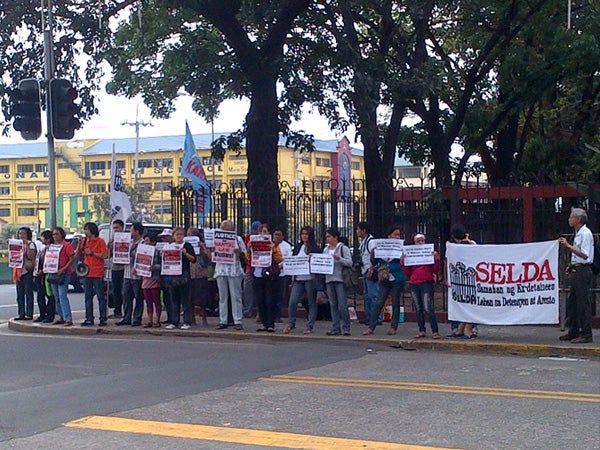 A group of human rights violation victims during the martial law imposed by the late dictator Ferdinand Marcos has demanded that the Human Rights Victims’ Claims Board (HRVCB), created to process reparations for Martial Law victims, keep to President Duterte’s order to start releasing partial compensation by April.

“No less than President Duterte instructed the board to render partial distribution of claims within 60 days. The HRVCB should stop making excuses and do their work in the reparation of victims. Justice
must be served immediately,” said Marie Hilao-Enriquez, chair of the leftist Samahan ng Ex-Detainees Laban sa Detensyon at Aresto (Selda), which counts among its members martial law survivors and reparation claimants.

In a forum with martial law victims on Saturday, Selda had given updates on the results of a dialogue in Malacañang on January 17 and 19. Chief of the agreements was the partial distribution of
reparations to those whose claims have already been adjudicated as of January, in 60 days following the meeting.

This meant the release of partial compensation should start around April, said Thaddeus Ifurung, Selda national coordinator, during the Saturday forum at the Department of Agrarian Reform covered court in Quezon city. The HRVCB, on January 23, had announced that it would release initial payments to 4,000 eligible claimants by the second quarter of the year.

Selda said it was agreed that the partial compensation would be capped at 50 percent of the total amount due to the Martial Law victims.

The HRVCB said it has already adjudicated a total of 30,027 claims since the board started operation in 2014, with 9,000 approved, including the 4,000 to start receiving payouts soon. There are 45,703 applications still waiting to be processed.

But to date, the HRVCB has yet to actually distribute any monetary reparation. The HRVCB has said it has been engaged in an arduous verification and identification process as set out by Republic Act 10368, the law creating the body. “Before monetary reparations can be distributed, the list of 4,000 preliminary eligible claimants must be published, appeals or oppositions resolved, and the corresponding partial final list duly published. The resolution of appeals and opposition will be decided by the Board en banc,” the HRVCB said, in its statement.

Ifurung noted the release of partial compensation was already “a partial victory for the victims,” noting that prior to Duterte’s order, the HRVCB had been stubborn about distributing the reparations only after all 75,730 applications had been processed.

Some of the victims, however, has expressed anger at the HRVCB, and see the partial compensation as akin to “alms.” “There is already money. So where is it? Why ‘partial?’ We are not begging here. We
shouldn’t be begging. Our comrades have died, we have shed our blood for this,” said Orly Castillo, a member of the trade union during the Martial La era, interspersing his rant with invectives.

HRVCB chair Lina Sarmiento has said that while partial pay-outs were previously considered, the board eventually “opted to stick to full completion of the initial phase of adjudication in light of resource
constraints.”

But for Enriquez, the HRVCB’s “foot-dragging and excuses are tantamount to further aggravating the suffering of martial law victims.” “It’s an everyday struggle for the victims to look for means
to survive their ailments and illnesses. The indemnification they would receive will at least compensate for their lack of resources,” Enriquez said.

Ifurung revealed that Selda has documented 23 reparation claimants who had passed away.

The operations of the HRVCB has been extended until 2018.

Meanwhile, martial law victim Danilo de la Fuente, 68, a labor organizer who was tortured and imprisoned for four years during the tail-end of the Marcos’ dictatorship, and who is among the more
than 9,500 plaintiffs who had won a suit against Marcos in a Hawaii court, said that even he never received updates about his claims application with the HRVCB. He questioned HRVCB’s statement that of
the plaintiffs in the Hawaii case, only 3,000 had applied for reparation under the HRVCB.

The HRVCB has also yet to issue a list of applications they have approved or rejected, another demand made by Selda.

For De la Fuente, however, any delay in indemnification would result not just in loss of money but loss of justice. “When we filed claims, it was primarily for recognition,” De la Fuente. “Money was only secondary.”

“There is still no justice here. The ill-gotten wealth of the Marcoses should be returned to the people. After all, we weren’t the only victims here. Even the future generations were victimized, because  that was their money, too. There needs to be justice for the people,” De la Fuente said.  SFM