Mayor linked to 2014 ambush try on lawmaker a free man 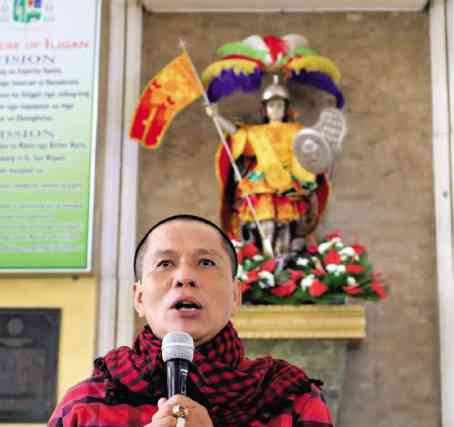 ILIGAN CITY—Mayor Celso Regencia walked out of detention on Monday after a Quezon City regional trial court found no basis for indicting him for allegedly trying to kill a former lawmaker.

Regencia, a retired police officer, was released from the city jail here at 8:30 a.m., said Vice Mayor Jemar Vera-Cruz, who was among supporters who fetched the mayor.

The group proceeded to the city hall where Regencia spoke before local government employees. A video footage released by Regencia’s supporters showed him recounting to employees the hardships he had to bear while in detention.

Regencia, a former policeman, was elected mayor in 2013 on a promise to stamp out corruption and the proliferation of illegal drugs and illegal gambling in the city.

But more than a year into office, Regencia was accused of masterminding the Dec. 11, 2014, ambush on a convoy of then three-term Iligan City Rep. Vicente Belmonte, who was widely thought to challenge him in the 2016 mayoral race. Belmonte survived but three of his aides were killed and three others were wounded in the ambush.

Regencia faced multiple murder and multiple frustrated murder charges for his alleged involvement in the attack. He denied he was behind the ambush.

In August 2015, a regional trial court in Initao, Misamis Oriental province ordered the arrest of Regencia who then went into hiding. He surfaced mid-October to file his candidacy for mayor. He later turned himself in to authorities.

Regencia discharged his duties as chief executive from detention, even holding meetings among key city officials in jail.

Regencia won a second term last year while in jail. His political allies were won and formed the majority in the city council.

From the Initao court, the case was transferred to a Quezon City regional trial court presided by Judge Ferdinand Baylon. —RYAN D. ROSAURO