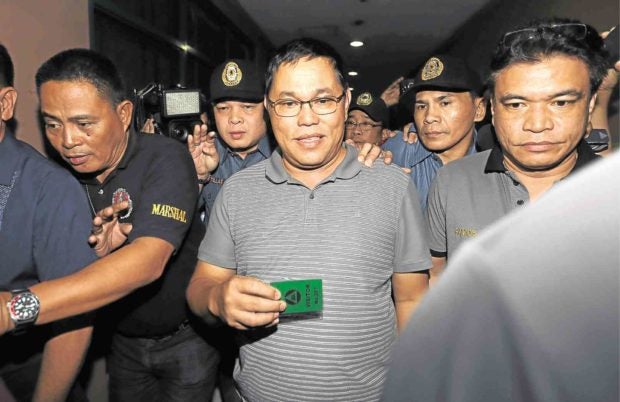 MANILA — Dismissed Philippine National Police Director General Alan Purisima has posted a P20,000 bail bond at the Sandiganbayan as he faces trial for participating in the  Mamasapano operation in 2015 while he was suspended over a graft case.

The bail amounted to P10,000 each for one count of usurpation of official functions and one count of violation of Section 3(a) of the Anti-Graft and Corrupt Practices Act for inducing a public official to break the rules.

The bail set for the graft case, as recommended in the information signed by Assistant Special Prosecutor Reza Casila-Derayunan, was less than half the normal recommendation of P30,000, under the 2000 Bail Bond Guide.

Purisima did not grant reporters an interview.

The case was raffled off on Friday to the Sandiganbayan Fourth Division, which notably handled the national broadband network cases against former President Gloria Macapagal-Arroyo and one of the graft cases against former Makati City Mayor Elenita Binay over alleged irregularities in the purchase of city hall furniture.

Purisima’s only co-accused is retired Special Action Forces head Getulio Napeñas. The prosecution said Purisima received operational updates from Napeñas and approved the date of the operation despite both police officials knowing fully well that the former was suspended pending a graft investigation over the Werfast firearms license delivery deal.

A case of reckless imprudence resulting in multiple homicide is pending against former President Benigno Aquino III in the preliminary investigation stage at the Office of the Ombudsman.  He recently submitted his counter-affidavit, explaining that Purisima was allowed to attend briefings because of the vital information he had on the so-called Oplan Exodus. Forty-four Special Action Force troops on the mission to neutralize bomber Zulkifli Bin Hir, alias Marwan, were killed by Moro rebels on Jan. 25, 2015. Subsequent congressional investigations showed that the Mamasapano operations code-named Oplan Exodus were not planned well.  SFM/rga