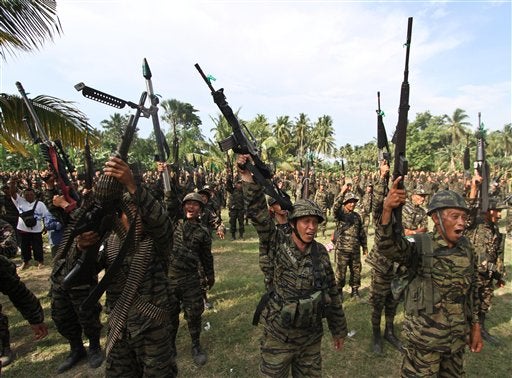 COTABATO CITY—President Duterte has warned Moro rebels to “forget about peace” if they provide sanctuary to terror groups being pursued by government troops in an ongoing offensive backed by fighter jets and helicopter gunships in Mindanao.

Mr. Duterte recalled that in the 2015 Mamasapano clash, the security forces did not coordinate with the Moro rebels, which was one reason cited for the debacle of a police commando operation against a Malaysian terror suspect inside an MILF-controlled area that resulted in the death of 44 Special Action Force troopers.

“This time, do not allow the Maute and other terrorist groups to enter or seek refuge in your camps. I’d be forced to tell the AFP (Armed Forces of the Philippines) and the police, ‘Get in,’” he said. “We’ll have a serious misunderstanding if that happens.”

“I do not want war … but if you give territory, that’s another thing. I’d just say forget about peace, let’s just fight,” the President added.

“We don’t have any intention to violate all the agreements we signed with the government,” Jaafar said, adding that helping state enemies is a violation of the accord.

Romeo Sema, a member of the central committee of the Muslimin Sema faction of the MNLF, said they made a clear stand years ago not to tolerate terrorism.

“We will never shelter terrorists because we are sincere in the peace agreement,” Sema said.

Lorenzana told the French news agency Agence France-Presse (AFP) that Hapilon was being carried by four men in a makeshift stretcher.

He said four other companions of Hapilon had been killed, including an Indonesian he identified as having the alias “Mohisen.”

Hapilon is on the US list of “Most Wanted Terrorists” and has a $5-million bounty on his head from Washington for the 2001 kidnapping of three Americans in the Philippines, two of whom had been killed.

Security analysts say the IS group has recognized Hapilon as its leader in Southeast Asia.

The military said it was making sure that no innocent lives are lost in the antiterror operation in Sulu, Basilan, Maguindanao and Lanao del Sur by conducting “surgical air strikes” on specific targets.

The Philippine Air Force said two Korean-made FA-50 jets and helicopter gunships conducted the aerial assaults. The FA-50s dropped bombs over rebel positions in Butig on Wednesday, the first time the newly acquired fighter jets had been used in combat.

Duterte said he was “more worried” about Islamic scholars, who allegedly promote terrorism.

“They are not carrying guns but they go around (as) missionaries. They have their agenda—terrorism,” he said.  —WITH REPORTS FROM EDWIN FERNANDEZ, JEOFFREY MAITEM, CHARLIE SEÑASE, LEILA B. SALAVERRIA AND  AFP