Young sex predator claims she was abused by her ma 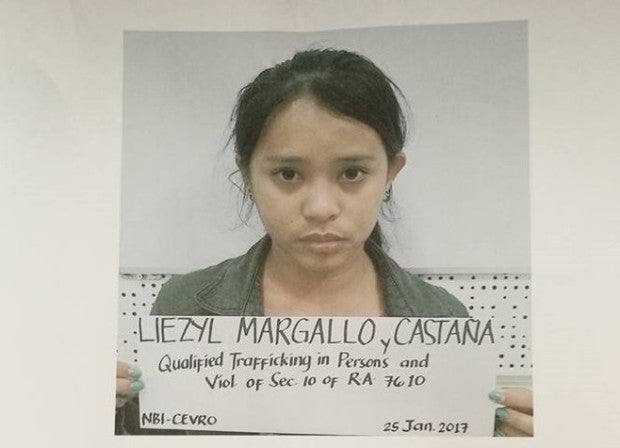 CEBU CITY—The suspected sexual predator has told authorities that she wanted her victims to go through the same ordeal she had as a child.

Liezyl Margallo, 23, told agents of the National Bureau of Investigation who arrested her that she, too, was physically abused by her own mother when she was young.

“Apparently, that was a traumatic experience for her,” lawyer Janet Francisco, head of the Manila-based NBI Anti-Human Trafficking Division, told the Inquirer in an interview.

Margallo was arrested on Malapascua Island on the northern tip of Cebu on Wednesday by NBI agents who served the 16 pending arrest warrants against her, ending a manhunt that lasted nearly two years.

She was flown back to Cagayan de Oro City, where she is now detained. Margallo is facing a string of charges for the torture and sexual abuse of at least nine children—one of whom died.

Speaking to Francisco, Margallo claimed she was maltreated by her mother.

“She wanted to retaliate by hurting children, and she found pleasure in doing it,” Francisco said, adding: “I sat down with her and she told me she regretted everything she did to the kids. (But) she has to answer for everything she committed against the children. Inasmuch as we pity her, justice must be served.”

Margallo and her live-in partner, Australian Peter Gerard Scully, who was arrested in Malaybalay, Bukidnon, in February 2015, are facing charges of violating provisions of the Anti-Photo and Video Voyeurism Act of 2009, and the Special Protection of Children Against Child Abuse, Exploitation and Discrimination Act and Anti-Trafficking in Persons Act of 2003.

The couple allegedly conspired in luring female street children and young scavengers into their fold, forcing them to perform sexual acts, torturing them and killing a 12-year-old girl.

Before her arrest, Margallo reportedly rented a condominium unit in uptown Cebu City for P13,000 a month, availed of a membership in a posh gym, and traveled to different local destinations like Bohol as a tourist guide, who offering sex for a fee, the NBI said.

Investigation showed that Margallo and Scully started videotaping lewd actions of minors after they met in the Philippines in 2011.

With the use of a laptop, Scully and Margallo filmed the videos in different areas in Mindanao, featuring young girls who were lured with promises of money and comfortable lives in exchange for performing lewd acts.

The couple would make these films in response to requests from foreign clients, who paid to livestream videos of children being tortured and sexually abused. The couple sold every video at $10,000.

The victims, aged 1 to 12 years old, were rescued in 2015 and are now under the custody of the Department of Social Welfare and Development in Cagayan de Oro City.

Francisco said the NBI continues its investigation to identify and arrest possible cohorts of Margallo in the Philippines.

Maryjun Delgado, a psychologist based in Cebu City, said that judging by the way the accused acted, Margallo’s behavior was clearly perverted.

“She wants to hurt kids to appease her experiences. She wants to feel how it is to be an abuser, and she enjoys what she’s doing. And yes, she is not afraid to kill,”  Delgado said./rga