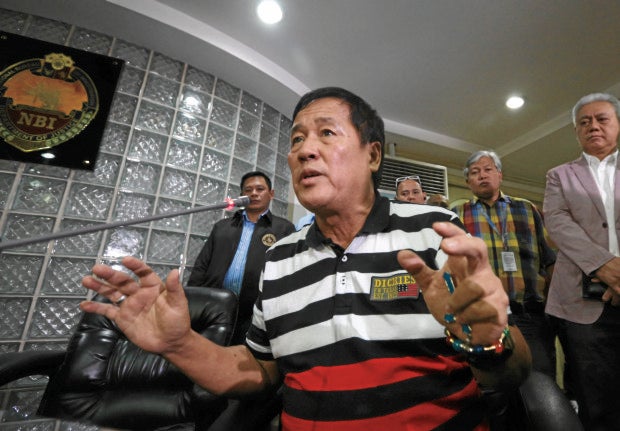 “I am innocent,” Gerardo Santiago told reporters on Friday when asked why he returned to the Philippines despite threats to his life.

Santiago is the owner of Gream Funeral Services in Caloocan City where the body of South Korean businessman Jee Ick-joo was taken after he was killed inside Philippine National Police headquarters in Camp Crame, Quezon City, on Oct. 18 last year.

Policemen pretending to be carrying out an antidrug mission took Jee from his home in Angeles City and transported him to Camp Crame, where one of the officers, SPO3 Ricky Sta. Isabel, allegedly strangled him  aboard the businessman’s own vehicle.

The cops then took Jee’s body to Santiago’s funeral parlor, from where it was taken to St. Nathaniel Crematory, also in Caloocan, to be cremated.

The kidnappers then demanded P5 million in ransom from the businessman’s wife.

She pleaded for government help, leading to an investigation that showed Jee had been killed and that exposed a kidnapping for ransom operation by rogue policemen who used President Rodrigo Duterte’s war on drugs as cover for their criminal activity.

The policemen involved in Jee’s abduction and murder have been arrested and are now facing kidnapping for ransom and homicide charges in a Pampanga court.

According to one of the accused, SPO4 Roy Villegas, Santiago was paid P30,000 and a golf set belonging to Jee for the disposal of the businessman’s body.

Santiago, who is chair of Barangay 165 Bagbaguin in Caloocan, disappeared after the Inquirer reported the kidnapping of Jee on Jan. 8.

He returned early Friday aboard a Philippine Airlines flight from Toronto and was met at the airport by National Bureau of Investigation agents.

“I came back because I’m innocent,” Santiago told reporters during a news briefing at NBI headquarters on Friday.

“If I am guilty, I will not return and just hide in Canada,” he said, adding he would face the charges filed against him.

While his name was not mentioned in the Department of Justice resolution recommending the filing of kidnapping for ransom with homicide charges against Jee’s killers, a certain “alias Ding” who owned the funeral parlor where the businessman’s body was taken appeared in the complaint.

Santiago said he was willing to cooperate with the government.

“The return of Mr. Santiago augurs well for our collective search for the truth behind the dastardly act committed against the person of the late Mr. Jee Ick-joo,” Aguirre said during the news briefing at NBI headquarters on Friday.

“It is a most welcome development. We assure the Filipino people and our Korean friends that earnest efforts will be exerted to bring the real perpetrators to justice,” he said.

“There are loose ends in the case. He would be of great help in explaining the unanswered questions in the investigation,” he added.

Aguirre said he ordered the NBI to protect Santiago, who claimed at least two groups wanted him dead.

Santiago is a former policeman.

Aguirre said Santiago did not explain why he chose the NBI for protection over his former organization.

He said Santiago would apply for admission into the government’s witness protection program.

The PNP Anti-Kidnapping Group on Friday asked the justice department to amend the charge sheet to include Santiago and two others in the criminal case filed against Sta. Isabel. —WITH REPORTS FROM GIL CABACUNGAN, LEILA B. SALAVERRIA, TARRA QUISMUNDO AND THE WIRES