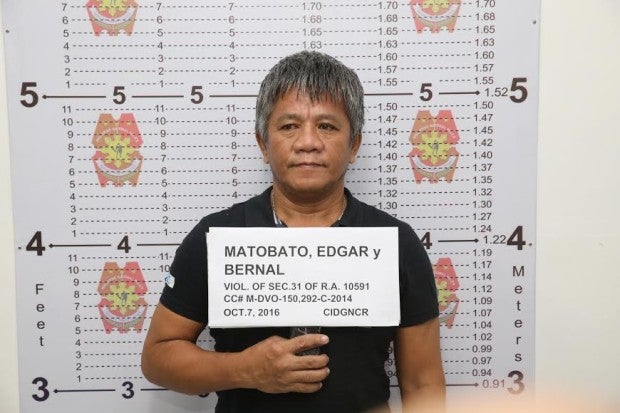 Four months after accusing President Rodrigo Duterte of being a murderer during a Senate probe, self-confessed Davao Death Squad (DDS) member Edgar Matobato is now facing arrest for a crime he committed 16 years ago.

The Department of Justice (DOJ) has endorsed the filing of kidnapping charges against Matobato and his alleged accomplice, Sonny Custodio, for the kidnapping of suspected terrorist Sali Makdum in Samal, Davao del Norte, in Nov. 2000.

In the information signed by Panabo City Prosecutor Joseph M. Apao last Dec. 22 (but released by the DOJ on Friday), Makdum’s name was listed as “Muck Doom.”

“There is reasonable ground to believe that a crime has been committed and that the accused are probably guilty thereof,” said Apao.

Apao said that both accused were informed of the complaint and the evidence that backed up these charges; and that they were also given the chance to submit their counter evidence.

“The said accused, being then private individuals, conspiring, confederating and helping one another, did then and there willfully, unlawfully and feloniously, with the use of force, threat and intimidation, and for the purpose of extorting money from Sali Muck Doom, kidnap, carry away and deprive Sali Muck Doom of his liberty without authority of law, against his will and consent,” Apao said.

No bail was recommended for Matobato’s arrest. Among the witnesses cited by the court in the case were Mirasol Marquez from Crossing Ulas, Davao City, and Jesus Abenion of Samal District.

In his Senate testimony, Matobato claimed that he was part of a seven-member team who kidnapped Makdum and brought him to the office of the Presidential Anti-Organized Crime Task Force in Davao City  which was then headed by PNP Chief Ronald “Bato” dela Rosa.

Matobato claimed that his team killed Makdum allegedly on the order of then Davao City Mayor Duterte. “We killed him, chopped him up, and buried him in a quarry. In Samal, we abducted him in the market,” Matobato said.

Dela Rosa, however, denied Matobato’s claim including his accusation that he worked with a certain SPO4 Arthur Lascañas, the alleged top dog of the DDS.