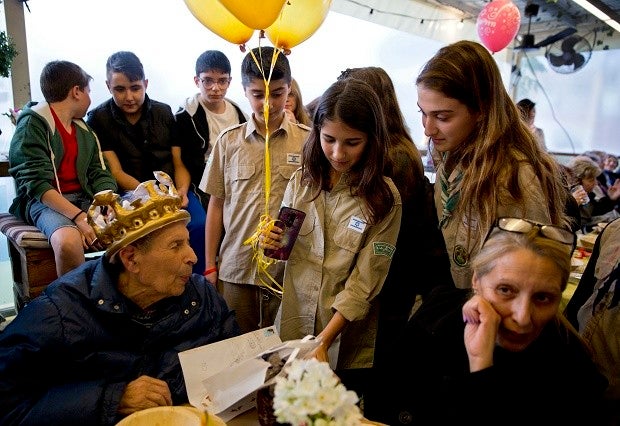 In this Wednesday, Jan. 24, 2017 photo, Israeli Holocaust survivor, Ernest Weiner, wearing crown, is visited by scouts during his birthday in a restaurant in the central Israeli city of Ramat Hasharon. More than 100 fellow Holocaust survivors and advocates on their behalf gathered for the 92nd birthday party of Ernest Weiner — a blind and widowed survivor who uses a wheelchair to get around and still lives on his own. As home to the world’s largest survivor community, Israel is grappling to serve the needs of the thousands of people like Weiner who are living out their final days alone. AP

RAMAT HASHARON, Israel — Surrounded by more than 100 fellow Holocaust survivors and young volunteers, a blind Ernest Weiner sat in his wheelchair with a puffy crown on his head as the crowd sang happy birthday and showered him with hugs and greetings.

The widowed and childless 92-year-old Weiner lives on his own and the cheerful gathering offered him one of life’s most valuable commodities — company.

As home to the world’s largest survivor community, Israel is grappling to serve the needs of thousands of people like Weiner who are living out their final days alone. Various government bodies and private organizations chip in to offer material, psychological and medical support to the survivors, still scarred by the horrors they experienced 70 years ago. But all agree that the greatest burden late in their lives is loneliness.

“It’s not pleasant to be alone,” Weiner said in his apartment south of Tel Aviv. “It gives a good feeling” to have people visit.

Some 160,000 elderly survivors remain in Israel, with a similar number worldwide. In Israel, about half receive special government stipends, but a third still live under the poverty line, well above the national 20 percent poverty rate.

That’s where the nonprofit sector gets involved. The Association for Immediate Help for Holocaust Survivors was established nine years ago for the purpose of aiding survivors anywhere in Israel, at a moment’s notice. Run solely on donations, it currently has some 8,000 volunteers around the country.

They help survivors with everything from legal assistance to paying their bills, buying their groceries to driving them to doctor appointments. Several times a year, they throw parties that become a highlight on survivors’ calendars.

The care continues even after death. The association’s modest office currently houses a number of orphaned dogs and cats left behind by their owners.

“Morally, not just as Jews but as people of the world, we must help them finish their life in dignity without them having to beg for warm food,” said Tamara More, the association’s voluntary CEO. “These are people whose lives were robbed from them because of the world’s silence, and we all have an obligation to give them something back in the little time they have left.”

Six million Jews were killed by German Nazis and their collaborators during the Holocaust, wiping out a third of world Jewry. Israel’s main Holocaust memorial day is in the spring — marking the anniversary of the Warsaw Ghetto uprising — while the United Nations designated Jan. 27 as International Holocaust Remembrance Day, commemorating the date of the liberation of the Auschwitz death camp in 1945.

But Schultz said money couldn’t address their emotional needs. Many survivors kept their pasts to themselves for decades, often alienating even the people closest to them due to their trauma. Only in their final years are many finally ready to open up, and often then there is no one around.

“There is always more you can give them, but what they really want most is someone to just be with them,” she said.

Plenty of organizations try to answer that need by matching soldiers and students with survivors. One highly publicized initiative offered university students rent-free accommodations in return for living with lonely survivors and keeping them company.

Noga Rotman, a 32-year-old computer science student, said she decided to get involved several years ago when her grandfather, a Holocaust survivor, became ill.

“I couldn’t help but think about those who didn’t have that,” she said, amid the balloons and flowers at Weiner’s party, which was attended by dozens who were inspired to come by a Facebook post. “Anytime we have something like this, you just see how much it means to them.”

Weiner said he especially appreciated the company of youngsters. As for fellow survivors, he had mixed feelings.

“On the one hand, it feels good to have all these people. On the other hand it reminds you of such tough times,” he said. “Happy it can’t be, because it was not happy times, but it is nice to have someone listen.”

When the Nazis invaded his native Austria, Weiner and his sister fled to Holland while their parents stayed behind and died of illness. The rest of the family perished.

After the Nazis occupied Holland, they were placed in the Westerbork transit camp, from where his sister was sent to her death in Auschwitz.

Thanks to his work as an electrician, Weiner got to know the camp well and estimates he escaped deportation about 15 times, once after he was placed on a train for Auschwitz. But the harsh conditions took their toll. In the course of his work, he got so many electric shocks that it caused heart damage, and an accident blinded his right eye. Diabetes later deprived him of sight in his left eye and confined him to a wheelchair.

Now that his wife is gone, Weiner has a caregiver who stays with him and another who visits daily. But the volunteers who arrive several times a week provide most of the conversation.

At the party, children handed him drawings. Soldiers and scouts gave gifts, and there was even a surprise visit from Israeli supermodel Bar Refaeli — who heard Weiner was a fan and stopped by to snap some pictures with him.

But the most moving moment was when a Dutch-speaking volunteer whom he has grown close to leaned in to let him know she was there. He teared up, and then she did too.

“The fact that he is glad, that brings me joy,” said Liel Van Aalderink, 22. “I don’t do really much extraordinary. I just give him attention and talk to him because he is alone in the world.”/rga