Be ready to get wet in this Laguna town fest in honor of Patron Saint of cops, soldiers | Inquirer News
Close
menu
search

Be ready to get wet in this Laguna town fest in honor of Patron Saint of cops, soldiers 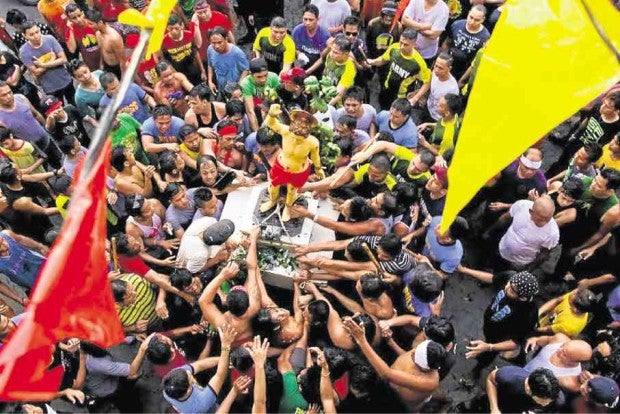 Devotees reach out to touch the image of Saint Sebastian while it is being returned to the Lumban Church in Laguna province after a fluvial procession. —CHRIS QUINTANA/CONTRIBUTOR

LUMBAN, LAGUNA—Every year, on the eve of the town fiesta on Jan. 20, residents of this laid-back town in Laguna province honor their patron saint, Sebastian the Martyr, through a procession along the Pagsanjan River.

After the afternoon Mass at San Sebastian Chapel, townsfolk carry the statue of Saint Sebastian down to the Pagsanjan River where an ornate boat awaits. The statue is placed on the boat, with some devotees boarding the vessel.

The boat navigates the river until it reaches the edge of town, where the statue is unloaded and carried to the parish church.

Locals douse the statue and themselves with water the whole time—from the chapel to the river and from the river to the church. Some use a tabo (dipper), and others pails, while children ready their plastic water guns.

A few residents outside their homes even splash water on passersby. Passing vehicles are not safe from water splashing and spraying.

For the procession this year, policemen, instead of devotees, were tasked to carry the statue of Saint Sebastian, the patron saint of athletes, soldiers and policemen.

Toward the end of the procession, water coming from a fire truck rained down on the townspeople.

Lumban’s original patron saint was Saint Francis of Assisi. The town’s parish church was the first stone church built outside Manila by Franciscan missionaries in the 1570s, said Mel Anthony Liboon, vice president for ministry of the Parish Pastoral Council.

Legend has it that a statue of Saint Sebastian was washed ashore and was found on the riverbanks of Lumban. Its source was traced to nearby Pagsanjan town, so locals brought the statue back to Pagsanjan. However, the statue was again found in Lumban, and since then, the town adopted Saint Sebastian as its patron saint.

Some 439 years later, Lumban, through the river procession, still commemorates the story of how the image of Saint Sebastian ended up in town.

Glaire Abayari, 49, head of a group of devotees, said more and more people join the procession and festivities every year.

The culmination of the town’s weeklong commemoration of their patron saint happens every last Sunday of January, which is called the “lupi” (to fold or to close).

During this day, a fluvial parade takes place. Devotees aboard decorated boats would navigate the Pagsanjan River.

Residents said drowning incidents were reported in past stagings of the lupi. In most instances, victims were drunk or were novice swimmers.

Herminigildo Legisma, 73, hopes that no one will die as they celebrate the lupi on Sunday. “Every year we pray that nobody will be ‘claimed’ by the river during the lupi,” he said.

Legisma believes the lupi is still one of the most traditional and merriest fiestas in Laguna.

“Here, even if you are a stranger, once you enter a household, you will be welcomed and offered food,” Legisma said.

“Just come here during the fiesta, and you will not be hungry. Just prepare to get wet, bring extra clothes and be a good sport,” he added.