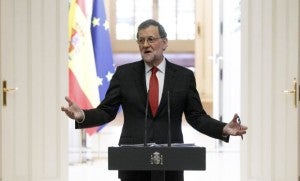 Spain’s Prime Minister Mariano Rajoy gestures during a traditional news conference at the end of the year held at the Moncloa Palace in Madrid, Spain, Friday, Dec. 30, 2016 . (Photo by DANIEL OCHOA DE OLZA/AP)

MADRID — Spain’s conservative prime minister says election victories for far-right parties in France and Germany would be a catastrophe for Europe.

Mariano Rajoy told Onda Cero radio Thursday that wins for Marine le Pen’s National Front in French elections in the spring and the nationalist Alternative for Germany, or AfD, in Germany in September would lead “simply to the destruction of Europe.”

Rajoy accused both parties of cheap demagogy, which, he said, only served to generate poverty and division.

Rajoy, who hopes Chancellor Angela Merkel’s conservative Christian Democratic Union wins in Germany and either the Republican or Socialist parties in France, said it was important for Europe that both elections went well.