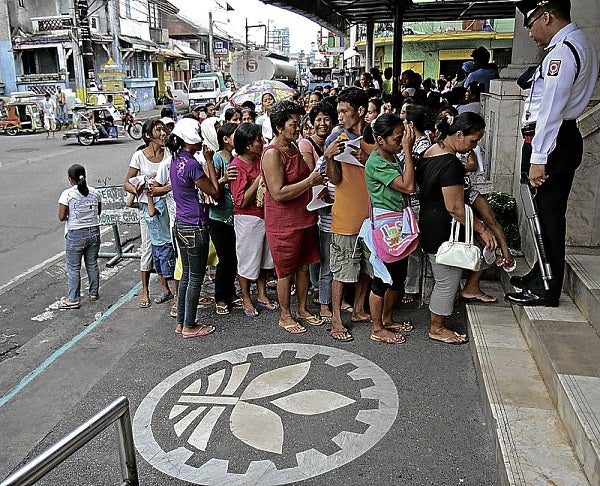 QUEUES by beneficiaries of the government’s cash transfer program have become a familiar sight where the program is being implemented, like in Mauban, Quezon, where the local Land Bank of the Phils. branch gets filled with cash claimants every month. DELFIN T. MALLARI JR/INQUIRER SOUTHERN LUZON

President Duterte’s adviser on entrepreneurship urged  the government on Thursday to gradually phase out the conditional cash transfer (CCT) program and shift to funding other government intervention programs.

“We give about 65 billion pesos to those that are really at the bottom of the pyramid, which is fine, which is good. But frankly, it does not really teach them how to fish, we’re just giving them the fish,” businessman Joey Concepcion said in a Palace briefing.

Concepcion said he floated the idea of shifting CCT funds to other government programs during the dinner of business tycoons with the President in Malacañang.

“So we have to change that and my proposal and I’ve asked, proposed this to some of the secretaries that maybe over the next 10 years, that should move towards more government intervention,” he said.

“Maybe 10 percent of that should gradually move to interventions like more funding towards DTI’s shared service facility; the Department of Science’s program called SETUP. More money should be spent in Department of Agriculture, giving our smaller entrepreneurs, farmers equipment,” he added.

He said the CCT program was merely a dole out and not a long-term solution to poverty.

“So I think and I encourage the government to really move towards this direction. I mean, not cutting out their conditional cash transfer overnight. But doing it over a period of 10 years and shifting that fund towards – still the poor entrepreneurs, the micro entrepreneurs and small entrepreneurs who don’t mind paying an interest but their challenge is really on collateral,” he said.

“And the basic logic is that one, it’s a dole out; it ends there, it’s not returned. The other one is we are giving it to an entrepreneur, a micro and a small who cannot get funding, or can I get the loan because he has no collateral, but he has the passion, the initiative,” he added.

Budget Secretary Benjamin Diokno earlier said there would be no expansion of CTT program under the Duterte administration.