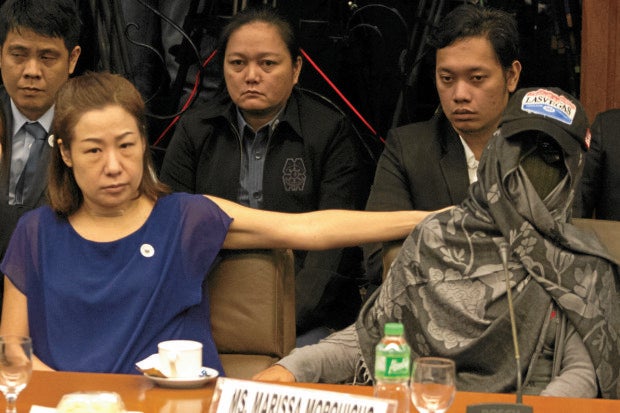 The last time she saw her boss, South Korean businessman Jee Ick-joo, alive was when he was struggling to breathe soon after being punched by his abductors inside a moving vehicle.

This was how Jee’s house help , Marisa Morquicho, described during the hearing of the Senate committee on public order and dangerous drugs on Thursday her last moments with the businessman.

Jee, along with the house help, was seized from his house in Angeles City, Pampanga in an alleged anti-drug operation last October 18. Unlike her boss, Morquicho was freed unharmed by police operatives allegedly led by SPO3 Ricky Sta. Isabel.

(Inside the vehicle, which left the subdivision and reached the Anonas Bridge, Sir Jee struggled to break free then he was punched by his captors.)

(Then the vehicle made a turn and Sir Jee complained of difficulty in breathing.)

“Pero nandoon ka pa ba nung namatay ang iyong boss?” Poe asked again, to which Morquicho answered no because she said their abductors transferred her to another vehicle.

(Were you present when your boss died?)

The house help positively identified Sta. Isabel during the Senate hearing as one of the policemen who took her and her boss.

(He’s the one who entered the house.)

(I  can only identify Sta. Isabel and SPO4 Villegas.)

While inside the house, Morquicho said she heard Sta. Isabel answering a phone call from a “boss.”

(What did he tell his boss?)

(He was asked if it’s positive or negative and he answered negative.)

(No drugs were found in the house of Jee who was being accused of selling drugs.)

Sta. Isabel, who was also in the hearing, repeatedly denied killing the Korean victim./ac/rga