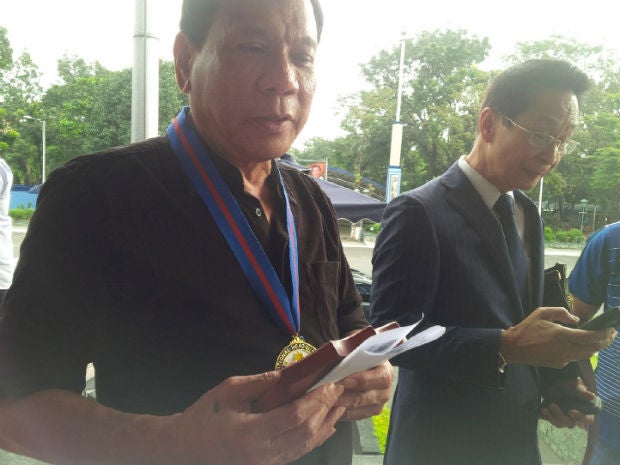 MANILA — There is a need for a new investigation into the 2015 Mamasapano encounter that claimed the lives of 44 Special Action Force policemen because the previous Aquino administration had been “biased” for certain personalities, according to President Duterte’s chief legal counsel, Salvador Panelo.

Panelo said that despite the Senate finding that former President Benigno Aquino III was ultimately responsible for the encounter that also killed 17 Moro Islamic Liberation Front members and three civilians, nothing had been done about such finding.

“It appears to us that there seems to be no movement in that direction. So I think it’s about time that we put closure to this,” Panelo told reporters on Wednesday.

The Senate and the House of Representatives have investigated the clash between the Special Action Forces and the Moro fighters during a government-led, anti-terror operation on January 25, 2015.

But Panelo said the Aquino administration had appeared to favor certain personalities.

He also dismissed allegations that the new probe, which would be conducted by a yet-to-be formed commission, was just a tactic to divert attention from the current controversies hounding the Duterte administration, particularly the kidnapping and killing of a Korean national by police officers.

“The reason why he made those statements is because of the presence of the victims who made a courtesy call to him and their cry for justice,” he said.

On fears that the commission would be influenced by the Duterte administration, Panelo noted that the members the President intended to appoint would be retired justices.

“I’m sure they would be independent thinkers and doers and would not be influenced by anyone,” he said

In announcing the creation of a new commission, President Duterte said his predecessor’s admission of responsibility for the Mamasapano encounter was not enough.

‎Justice Secretary Vitaliano Aguirre II said on Wednesday he was surprised why former President Aquino got off the hook easily even before the investigation of Mamasapano began. “Now that he is not President, we have to look deeper into that,” said Aguirre.

Aguire said it was unfair that those who were only following orders were charged while those who gave the order went scot-free.

Aguirre said that being the former lawyer of Napeñas, he would inhibit from taking a hand in the probe. But he said he would accept an appointment from the President to the Mamasapano commission he was planning to form. “I won’t inhibit anymore if it’s a commission because I’m sure the new members would learn from my inputs,” said Aguirre.

Aguirre said there would be no closure to the  Mamasapano massacre if lingering questions were not answered, including whether former President Aquino barred the military from helping the surrounded Special Action Force troopers on the advice of then Peace Adviser Teresita “Ging” Deles.

Aguirre said Gen. Edmundo Pangilinan, commander of the 6th Infantry Division, should explain to the public why he withheld artillery support for the SAF troopers when they were surrounded by Moro rebels and bandits in an isolated cornfield and when the SAF’s “circumstances” still warranted the military’s help.

He also questioned why probers failed to subject the mobile phones of the key players in the operation of “Opl Exodus” to forensic examination, except for former SAF Commander Getulio Napenas Jr. .

In a statement, Aguirre said: “There would be no closure for the families left behind by this tragic incident. Even if Congress conducted several hearings on this, so many questions remain unanswered.”

He said the DOJ had moved to transfer the venue of the case filed against the killers of the SAF troopers from the Regional Trial Court of Cotabato to Metro Manila so that the judge and the witnesses would be be shielded from threats. He said the pressure on the Cotabato judge was the reason for the delay in the issuance of the warrant of arrest against the SAF killers, most of whom were John Does.  SFM/rga