Duterte to gov’t underperformers:  Leave, give posts to true workers 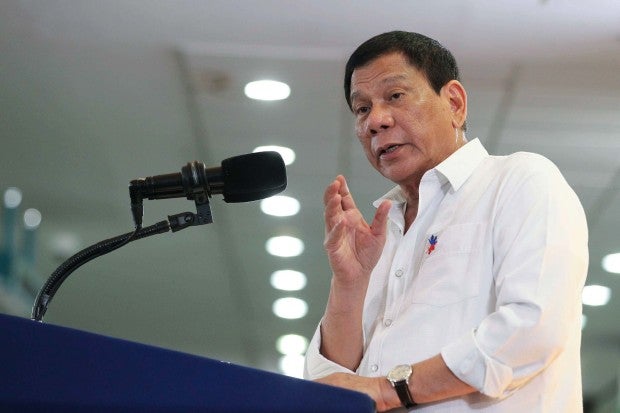 Mr. Duterte was in Tacloban City, on Wednesday, to inspect the projects for the survivors, which he earlier said he had wanted completed by December. He had then tasked Presidential Assistant for the Visayas Michael Diño to oversee the construction efforts.

He expressed his displeasure with underperforming officials and workers in government, stressing government workers should prove they deserve the position.

“We show to the people of the Republic of the Philippines that we deserve to be in government, because son of a bitch, if we can’t do it, we should leave. Simple as that,” he said.

He challenged everyone in government who has lost the enthusiasm for the job to resign and give the job to someone who could do it.

Mr. Duterte also said he would impose “severe restrictions” on perks received by people in government, noting that some of them have been receiving millions.

The President said, seemingly in jest, that if the survivors were not in their permanent resettlement shelters by March, he would make officials in charge of Yolanda housing carry crosses.

He said he would return that month to check on the progress of the project. By that time, facilities should be in place, including water services, he said.

“If it’s not completed by March, build five crosses, like the ones for Christ. I will make them carry it and go around the area,” he said, to laughter from the crowd.

On a more serious note, he warned government officials and employees not to delay processes and issuance of permits, and to work their full eight hours in service.

Those who refuse to follow would be administratively charged with neglect of duty, and suspended from office, he said.

The President recalled that he was angry at the slow pace of construction efforts when he last visited Tacloban in November, three years after supertyphoon Yolanda struck.

It is the duty of officials to expedite the processes, and executive directors only have 15 days to act, especially during national calamity, according to the President.

“If the government owns the land, work yourself to death, do no leave your office until you have finished your job,” he said.

Those who have not been doing their jobs and who have been leaving their offices in the middle of the day, refusing to work the full eight hours, have been swindling the government, and he would show them no mercy, Duterte said.

“For me, it’s zero tolerance. Dismissal,” he said.

“I would tell the civil service, help me or move out of my way, if you cannot impose the penalty that I want. It’s zero tolerance, no second chance,” he added.

He also complained about judges who don’t report to offices and delay the signing of crucial documents.  SFM