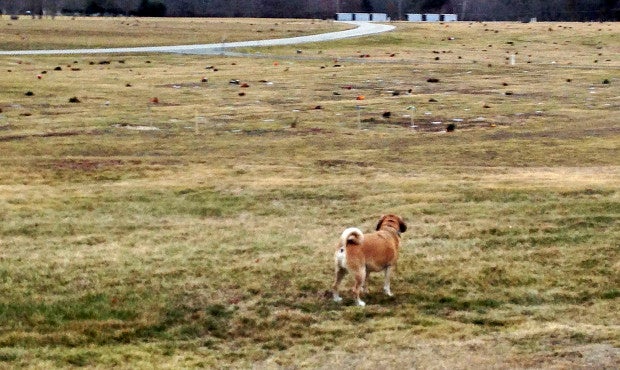 In this Monday, Feb. 1, 2016 photo, a Puggle named Artie stands on the grounds of the Rhode Island Veterans Memorial Cemetery in Exeter, Rhode Island.Several people were buried in the wrong graves at the veterans’ cemetery because grave markers in one row were off by a burial plot. Veterans Affairs Director Kasim Yarn apologized on Monday, Jan. 23, 2017, for the grave mix-up. AP

WARWICK, Rhode Island — Seven people were buried in the wrong graves at a veterans’ cemetery because grave markers in one row were off by a burial plot.

“We recognize our cemetery is hallowed ground, and we did not meet our obligation to our veterans, their loved ones who are buried here or the families and the veterans who continue to come to our cemetery to pay their respects,” he said at his office in Warwick.

Rhode Island Veterans Memorial Cemetery workers left two spaces instead of one to transfer the remains of a veteran’s father in November 2010. The extra space wasn’t accounted for when permanent grave markers were added that spring. Consequently, 21 grave markers were off.

Seven interments occurred in that row since 2010, resulting in those cemetery vaults being buried in the adjacent plots.

The dead people and the markers were moved this past weekend. Families are being contacted.

Yarn said he was alerted to the issue on Thursday, after the grounds crew at the Exeter cemetery discovered the issue as it prepared for a burial in the row that day.

Yarn said there wasn’t a formalized process to prevent mistakes like this and he’s addressing that. Among the changes, when someone buries a vault, a second cemetery worker will verify that it’s correctly placed.

Yarn said he believes the mistake was an isolated incident, and he said no staff members are being disciplined.

The cemetery’s administrator took over in November. More than 34,000 people are buried at the cemetery, with about 1,200 interments occurring annually. CBB/rga