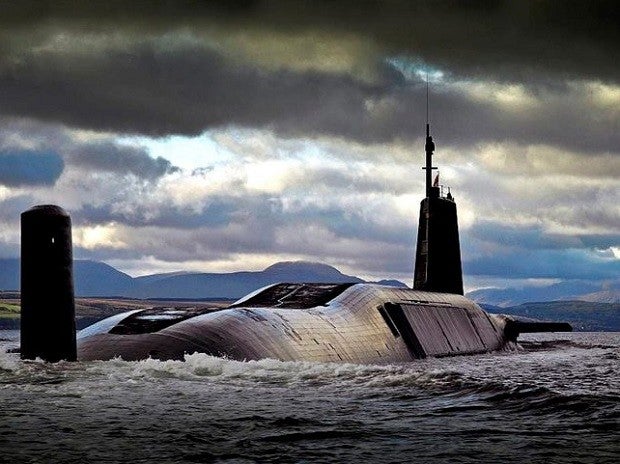 The HMS Vengeance returns to HMNB Clyde in the United Kingdom after completing Operational Sea Training. The trials were conducted in Scottish exercise areas. HMS Vengeance is the fourth and final Vanguard-class submarine of the Royal Navy. Vengeance carries the Trident ballistic missile, the UK’s nuclear deterrent. UK MINISTRY OF DEFENSE PHOTO

LONDON, United Kingdom — Britain hit back on Monday against reports of a failed test of its nuclear weapons deterrent last year when an unarmed missile reportedly misfired, possibly in the direction of the United States.

“We do not comment on the detail of submarine operations,” Fallon said, adding: “The capability and effectiveness of the UK’s independent nuclear deterrent is not in doubt.”

The main opposition Labor Party accused the government of a “lack of transparency”.

The Scottish National Party, which opposes the nuclear deterrent, said it was “outrageous” that members of parliament had not been informed.

The Sunday Times, citing a senior naval source, claimed that the Trident II D5 missile failed after being launched from a British submarine off the coast of Florida in June.

The source suggested the missile may have veered off in the wrong direction towards the United States instead of the intended target off the west coast of Africa.

The malfunction came just weeks before the House of Commons was asked on July 18 to approve the replacement of the ageing submarines that carry Britain’s nuclear arsenal.

Theresa May was not prime minister at the time of the test, but she took office shortly before the vote and successfully appealed to MPs to approve the £41 billion (47 billion euro, $50.7 billion) project.

In a BBC interview on Sunday, she sidestepped questions about whether she knew about the malfunction when she made her statement to MPs.

A Downing Street spokeswoman told reporters on Monday that May had been briefed about the test. CBB