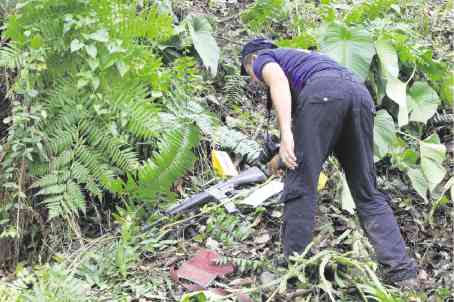 A policeman marks the site where firearms were recovered after a clash in Makilala, North Cotabato. —CARLO AGAMON

MAKILALA, NORTH COTABATO—While the government and the National Democratic Front of the Philippines (NDFP) panels are talking peace in Rome, a clash between soldiers and communist rebels erupted here on Saturday.

A rebel was killed in the encounter in the remote village of Biangan, said Lt. Col. Harold Argamosa, chief of the Army’s 39th Infantry Battalion (IB).

In Rome, the government and NDFP peace panels have agreed to discuss the clash as they resume talks today.

Fidel Agcaoili, NDFP chief negotiator, said: “It is now clear to us that it was an attack despite the unilateral ceasefire. The military admitted that it was a legitimate military operation against a lawless armed group.”

Presidential Adviser on the Peace Process Jesus Dureza said this incident underscores the importance of a bilateral ceasefire agreement.

“I have to verify first what actually happened but from initial reports reaching me here in New York City, a bilateral ceasefire with guidelines and mechanisms in place are becoming all the more needed and imperative, otherwise each side (the Armed Forces of the Philippines and the New People’s Army) will have their own reports and accusations favorable to their own version and interest or propaganda line,” Dureza said in a statement.

The Tiamzons said communities were complaining about the presence of military forces in villages “where threats, surveillance and interventions” are allegedly happening.

Ernesto Abella, President Duterte’s spokesperson, on Monday said the unilateral ceasefire announced by the President would not be lifted despite the encounter.

Asked if it would have any effect on the peace negotiations, Abella said: “No. It should not affect any of the ongoing talks.”

“(It’s) simply because the talks are ongoing and we are intent on focusing on settling the matter,” he added.

Argamosa said the soldiers were in the village of Biangan to back up the police in its law enforcement operation against NPA rebels.

On Friday afternoon, communist rebels allegedly commandeered a 10-wheel truck of the Santos Land Development Corp. in the village of Malisala.

The NPA earlier announced that eight soldiers were killed in the clash but the military denied this information.

Rigoberto Sanchez, NPA Southern Mindanao spokesperson, in a statement, said soldiers launched an offensive in Barangay Biangan where an NPA unit was encamped.

“The war dogs of the 39th IB and the entire AFP cannot wash its hands clean of this flagrant violation of their own ceasefire: Sitio Lokatong in Barangay Biangan is a remote area that their presence can only mean an offensive operation against the NPA,” Sanchez said.

“They fool no one by claiming that their operation was merely in response to reports … on the presence of lawless groups: for the entire day, they actively maneuvered to engage the evading unit of the NPA,” he added.

“The Duterte [administration] must know by now that it is the bullish insincerity of its armed forces to continue its counterinsurgency campaign that is the biggest impediment in the quest for just and lasting peace,” Sanchez said. —WITH A REPORT FROM MARLON RAMOS