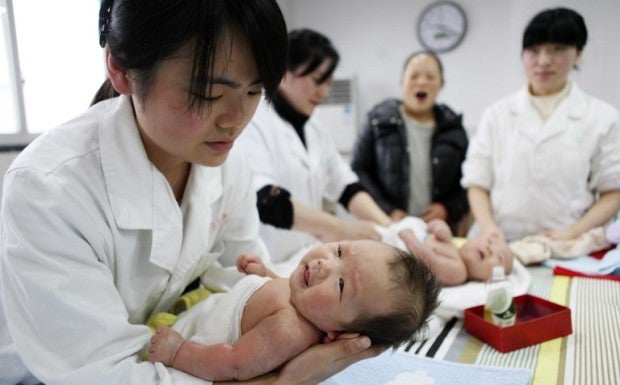 This photograph taken on December 15, 2016, shows a nurse holding a baby at an infant care center in Yongquan, in Chongqing town, in southwest China. China had one million more births in 2016 than in 2015, following the end of the one-child policy at the end of 2015. AFP

BEIJING, China — China last year saw its highest number of births this century, officials said, a baby bump that came after the country relaxed its family planning policies in 2015 to allow more families a second child.

The country welcomed 17.86 million new children in 2016, an annual increase of 7.9 percent, with nearly half of the new births occurring in families which already had one child, Yang Wenzhuang, an official from the National Health and Family Planning Commission (NHFPC), said Sunday.

The figure was 1.31 million higher than in 2015, according to an article in the state-run China Daily.

The proportion of newborns born to parents who already had a first child rose from around 30 percent in 2013 to 45 percent in 2016, Yang said, attributing the increase to the rule change.

According to statistics released earlier, new births were concentrated in the first half of the year, before the policy could have had an effect. In addition, 2016 was the lunar year of the monkey — considered a particularly auspicious zodiac sign to be born under.

Since the late 1970s, strict measures in the world’s most populous country restricted most couples to only a single child, with violators facing fines and even forced abortions.

The country loosened restrictions on the repressive “one-child policy” a little over a year ago in response to concerns about an ageing population and shrinking workforce.

While some parents had long been allowed more than one child, the change allowed every family a second.

Nevertheless, the financial costs of a second child have stopped many parents from pursuing the option.

Around 53 percent of one-child families have no desire for a second, according to a survey of 10,000 families with kids under 15 by the All-China Women’s Federation. CBB/rga