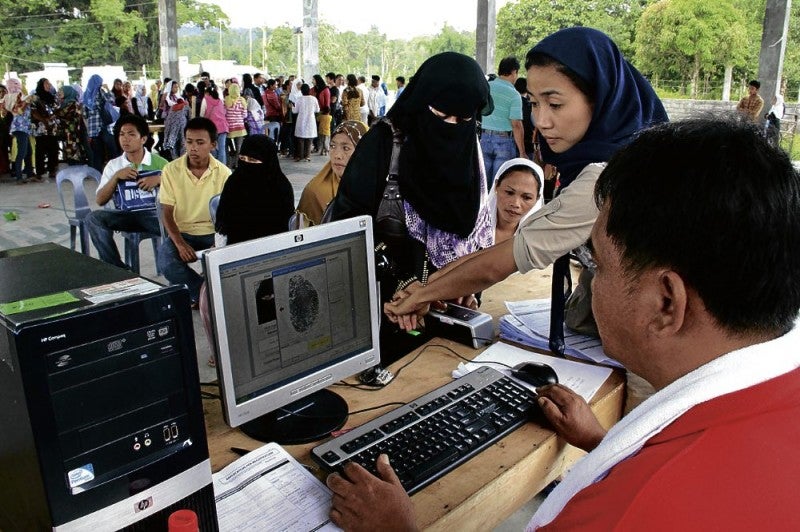 A REGISTRANT’S fingerprint appears on the screen of a computer being operated by a Commission on Elections worker in Masiu, Lanao del Sur. Comelec is using biometrics to reduce, if not eliminate, fraud in the registration of voters in the Autonomous Region in Muslim Mindanao. INQUIRER MINDANAO FILE PHOTO

In anticipation of more voters signing up for the upcoming polls, the Commission on Elections has earmarked P10 million for the purchase of voter registration machines (VRMs) and peripherals.

In an invitation to bid posted on the poll body’s website, the bids and awards committee (BAC) said the allocation is meant for the continuing registration of voters.

“The Comelec, through its BAC, invites interested bidders to apply for eligibility and to bid for the supply and delivery of VRMs and peripherals,” part of the bid invitation read.

Prospective bidders are required to have accomplished a contract similar to the project in the last five years.

Bidding will conducted through open competitive bidding. Bids received in excess of the approved budget contract per item shall be automatically rejected at the bid opening.

Bid documents may be purchased until February 13, from Mondays to Saturdays at 8 a.m. to 5 p.m. at the Comelec’s BAC secretariat office.

The pre-bid conference will be held on January 30, 10 a.m. at the Comelec session hall in Intramuros, Manila while the deadline for the submission of bids and the opening of bids will be on February 13, 9 a.m.

It may be recalled that the Comelec resumed its voters’ registration last November 7, 2016, which will run until April 29, 2017.

This voters’ registration is for the October 23, 2017 barangay and Sangguniang Kabataan elections.

The poll body is expecting three million more voters for the barangay elections and another two million for the Sangguniang Kabataan elections. JE/rga