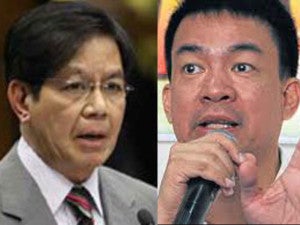 MANILA — Senate President Aquilino “Koko” Pimentel III is in no danger of being ousted as the Senate top leader as his super-majority remains intact even if some members want certain senators out of the majority bloc.

“The leadership of Senate President Pimentel is strong,” Sen. Panfilo Lacson said in a dzBB program on Sunday.

Lacson said he was among the right people to know the situation as he was one of the senators who started the super-majority that aligned with Pimentel from the start.

He acknowledged issues would arise within the super-majority whenever the four Liberal Party senators plus their LP-ally senator in the bloc would take an opposing position and side with the minority on certain matters.

This included the recent quarrel among some senators following the issue of which Senate committee should investigate the P50-million bribery scandal at the Bureau of Immigration (BI) involving casino mogul Jack Lam.

A heated exchange ensued between Senators Juan Miguel Zubiri and Sen. Antonio Trillanes IV last week after Trillanes lost the chance for his committee on civil service and government reorganization to head an inquiry on the BI bribery scandal. Trillanes had claimed that Zubiri and Sen. Richard Gordon, whose blue ribbon would start conducting hearings on Monday (Jan. 23) on the BI bribery scandal, were out to whitewash the inquiry, prompting a heated exchange between Zubiri and him.

The incident prompted two senators — Sen. JV Ejercito (who has since withdran his call) and Gordon — to call for LP senators to get out of the majority since they did not vote with the majority in stopping Trillanes from taking over the inquiry.

Lacson said the calls for LP senators to leave the majority triggered talk that Pimentel’s leadership might be in peril but he believed the Senate president’s leadership has remained strong despite these skirmishes.

“(Pimentel) will remain as SP…there is no danger the Senate President will be removed,” he added.

Lacson said he preferred the LP senators to remain in the super-majority as they have been contributing very much during debates in the Senate, especially Senate President Pro Tempore Franklin Drilon whose insights he valued.

Read Next
Trump, Netanyahu discuss ‘threats posed by Iran’: White House
EDITORS' PICK
Timeless Elegance in the Philippines’ Most Distinguished Home Kitchens
Singapore confirms first case of novel coronavirus
Group slams Duterte: Terminate VFA because of sovereignty issues, not because of Bato
Beyond water service: Maynilad builds massive infrastructure projects to clean up Metro Manila waterways
SM continues to send relief assistance to remote towns in Batangas
Bato on ending VFA with US: ‘I don’t deserve this bargain but it’s not all about me’
MOST READ
Duterte threatens to scrap VFA if US doesn’t rectify Bato’s visa cancellation
Part of Aurora Boulevard in Cubao closed from Jan. 25 – Feb. 1
Lacson on Duterte’s threat to end VFA over Bato’s canceled visa: Where is the connection?
Corruption worsens: PH falls 14 notches to 113th spot in global index 2019
Don't miss out on the latest news and information.