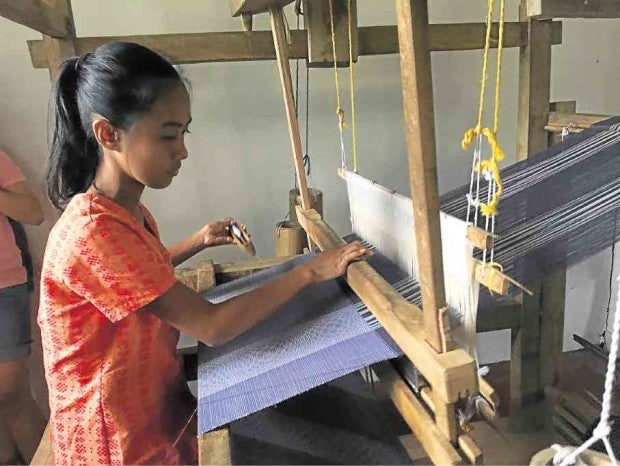 Arabela Gampong, at 13, is among the young weavers of Pinili town. —PHOTOS BY LEILANIE ADRIANO AND ALARIC YANOS/CONTRIBUTOR

PINILI, ILOCOS NORTE—The next Magdalena Gamayo, a National Living Treasure for her mastery in weaving the Ilocano cloth “inabel,” could just be around the corner.

At 13, Arabela Gampong, a student of Pinili Integrated School, has been displaying excellent skills in “abel” (Ilocano term for weaving local cloth) just like her idol, Gamayo, who many here refer to as “Lola Magdalena.”

In 2012, the National Commission for Culture and the Arts awarded Gamayo the Gawad Manlilikha ng Bayan, the highest honor given to artisans, craftsmen or folk artists. It is a title in the same order with National Artist or National Scientist.

Gamayo has been holding lessons for weavers who would take up the trade of producing the inabel, which is known for its intricate designs and durability.

She looks frail at 93 but Gamayo says she’s certain the weaving tradition, which has sustained her through the years, would be carried by the next generation, particularly Arabela.

Unlike other teenage girls, Arabela prefers to stay home during her free time and face the loom. “It is very fulfilling once you see your finished product. I also get additional ‘baon’ (allowance) for school [when the inabel is sold],” she says.

Gamayo has observed how Arabela patiently passes the linen thread to the loom. She says she’s confident the weaving industry’s future is safe in the hands of weavers like Arabela. 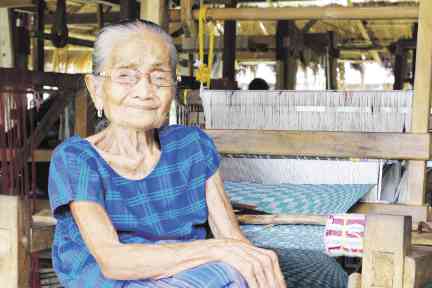 Devoting most of her time to weaving inabel, Gamayo says: “I never thought my passion for abel will bring me this good fortune. I just finished Grade 3. Since then, all I wanted to do was weave.”

Arabela is just one of many aspiring weavers whom Gamayo has been patiently teaching.

“They are already good and they have perfected the designs. I already shared everything that I know and it is now up to them to nurture it,” Gamayo says.

On Dec. 26 last year, the House of Inabel, an old Spanish brick house at the Pinili town center that has been renovated and converted into a showroom for abel products, opened through the initiative of patrons like Dr. Joven Cuanang.

Cuanang, a former medical director of St. Luke’s Medical Center in Metro Manila, says the house was designed to engage people, especially young Filipinos, in the tradition of Ilocano weaving and to ensure that inabel remains a relevant trade.

Gamayo has encouraged private organizations, schools and local governments to use inabel for their uniforms, for example.

In order to cope with globalization, 25 farmers in Barangay (village) Lumbaan here are also doing their share in preserving the industry.

In between planting rice and vegetables, Marjo Galinato says farmers like him have been producing cotton. Cotton, a natural fiber, has been scarce in the last few decades, so some weavers have been using synthetic threads imported from China.

Lumbaan used to have cotton fields, an important raw material in loom weaving. But farmers soon shifted to tobacco farming.

Galinato has expanded his 5,000-square meter rice farm to 2.5 hectares which are now planted with cotton during the second cropping season. His gross income of P350,000 from cotton is twice the profits he gets from selling palay.

“The world is looking for products which are organic, ecologically sensitive and handcrafted by people. So with a brand like Magdalena Gamayo, we need to help [the local community] develop the production chain,” Cuanang says.