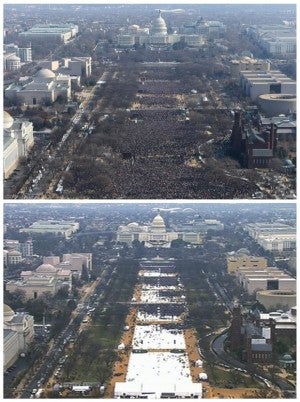 This pair of photos shows a view of the crowd on the National Mall at the inaugurations of President Barack Obama, above, on Jan. 20, 2009, and President Donald Trump, below, on Jan. 20, 2017. The photo above and the screengrab from video below were both shot shortly before noon from the top of the Washington Monument. (Photo from AP)

Photos of the National Mall from President Barack Obama’s inauguration in January 2009 show a teeming crowd stretching from the West Front of the US Capitol all the way to the Washington Monument. Photos taken from the same position on Friday show large swaths of empty space on the Mall.

Thin crowds and semi-empty bleachers also dotted the inaugural parade route. Hotels across the District of Columbia reported vacancies, a rarity for an event as large as a presidential inauguration. And ridership on the Washington’s Metro system didn’t match that of recent inaugurations.

There were 197,000 at 11 a.m. in 2005 for President George W. Bush’s second inauguration. The Metro system also posted that only two parking lots at stations were more than 60 percent full.

The smaller crowds may prove humbling for Trump, who frequently boasted during the campaign about the attendance at his rallies and would claim, often inaccurately, that thousands more people were waiting outside and unable to get into the event.

An official crowd count of Trump’s inauguration may not ever be known.

For decades, the National Park Service provided official crowd estimates for gatherings on the National Mall. That changed after the Million Man March in 1995, a gathering of black men meant to show renewed commitment to family and solidarity. The park service estimated 400,000 people attended the march, making it one of the largest demonstrations in history in Washington.

But organizers believed they reached their goal of 1 million participants. Nation of Islam leader Louis Farrakhan, one of the march organizers, threatened to sue the park service, arguing its count was motivated by “racism, white supremacy and hatred for Louis Farrakhan.”

No lawsuit was filed, but the dispute was enough to get the park service out of the head-counting business. –Jonathan Lemire