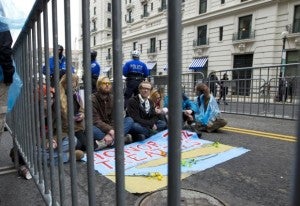 Demonstrators sit at the entrance of a security checkpoint, to block people to enter, Friday, Jan. 20, 2017, during the inauguration of President Donald Trump in Washington. (Photo by JOSE LUIS MAGANA/AP)

WASHINGTON, DC — Police in the US capital again clashed with demonstrators – this time with a larger group than earlier in the day.

Well over 1,000 protesters against President Donald J. Trump, who had taken his oath of office earlier, took to the streets of downtown Washington for a confrontation with police.

Authorities were again using pepper spray, and some demonstrators appeared to have difficulty breathing.

Some in the crowd were throwing cups, water bottles and objects – including chunks of concrete. Some protesters rolled large steel trash cans at police.