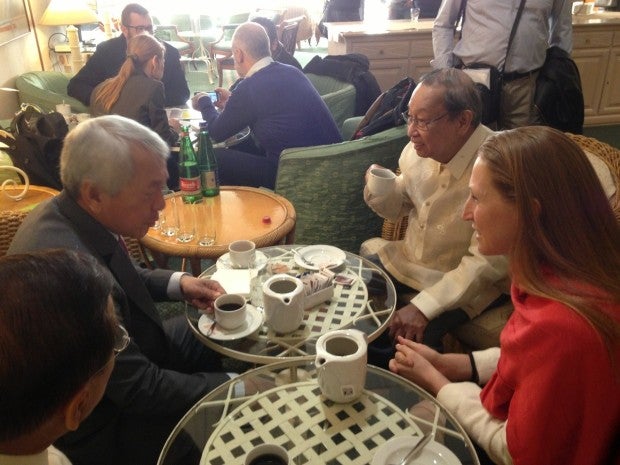 Communist Party of the Philippines founder Jose Maria Sison and Foreign Affairs Secretary Perfecto Yasay Jr. are seen having a coffee break during the third round of peace talks between the Philippine government and the communist rebels in Rome, Italy, on Jan 19, 2017. (Photo contributed by Atty. Edre Olalia, counsel of the communist negotiator National Democratic Front of the Philippines)

ROME—Philippine government and communist rebel negotiators resumed peace talks here on Thursday, with the insurgents saying they supported President Rodrigo Duterte’s plan for a shift to the federal system but warning that alleged government violations of a human rights accord might prompt them to terminate a monthslong ceasefire.

Government officials led by Foreign Secretary Perfecto Yasay Jr. and guerrilla leaders shook hands in a show of unity at a hotel in the Italian capital before resuming the negotiations, which both sides acknowledged would be tough.

Special envoy Elisabeth Slattum from Norway, which has been brokering the talks, also attended.

The venue was shifted from the Norwegian capital, Oslo, which Philippine officials said would be too cold.

“Although there are still unresolved issues, with regard to commitments to releases of political prisoners, commitments on a bilateral ceasefire, which will both be subjects of discussion during the round of talks, we commend the parties for doing exactly that, for working together,” Slattum said.

But his rebel counterpart, Fidel Agcaoili, was less optimistic, saying “the prospect for forging a bilateral ceasefire agreement has grown dim.”

Agcaoili said the National Democratic Front of the Philippines (NDFP), the umbrella group of the local communist movement, had raised a number of complaints, including alleged government breaches of a 1998 accord on respecting human rights and another pact on the safety of guerrilla consultants.

He said the complaints, including the failure to release nearly 400 detainees the rebels consider political prisoners, made extending a five-month ceasefire “untenable.”

The guerrillas also expressed concern over Mr. Duterte’s brutal crackdown on illegal drugs, which has left more than 6,000 suspects dead, and his decision to allow the burial of former dictator Ferdinand Marcos at Libingan ng mga Bayani in November.

Agcaoili said innocent people had been killed in Mr. Duterte’s war on drugs “due to brutal, reckless and indiscriminate methods employed by the police in its antidrug operations.”

He said Mr. Duterte should shift his priority to solving the larger problem of poverty through social and economic reforms, which are the main focus of this week’s round of talks.

The insurgents have accused the military of violating a ceasefire by occupying schools, village halls and other civilian areas and conducting illegal searches, interrogations and surveillance of suspected rebel supporters.

The military has denied the accusations.

The rebels said they supported the shift to a federal system, although NDFP consultant Jose Maria Sison, founding chair of the Communist Party of the Philippines, said implementing  socioeconomic and political reforms was crucial to their support.

“The NDFP is willing to maintain its alliance with the [government] and the Duterte administration in particular by cooperating in the founding of a Federal Republic of the Philippines, the creation of a parliamentary system and the making of a new Constitution,” Sison said, adding that the Rome talks offered an opportunity for the examination of both the strengths and ills of a unitary and federal forms of government.

“A federal system of government is not necessarily good or better than [the unitary system], especially when it carries over from an already rotten unitary form of state certain malignancies and does not have constitutional guarantees against the penchant of the oligarchy for puppetry, dictatorship, graft and corruption, dynasty-building and warlordism,” he said.

Sison said the negotiators were making headway in the discussions on social and economic reforms.

He said the negotiators had already “fleshed out” a “common outline” of social and economic reforms and the two sides could reach agreement on how to accelerate unification of their drafts before they moved to a fourth round of talks. —WITH A REPORT FROM AP