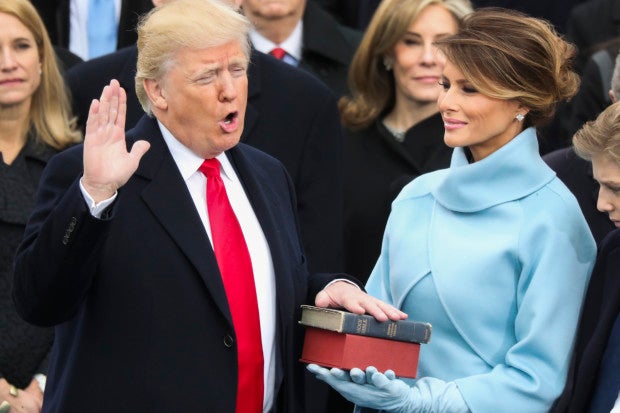 Donald Trump is sworn in as the 45th president of the United States as Melania Trump looks on during the 58th Presidential Inauguration at the U.S. Capitol in Washington, Friday, Jan. 20, 2017. (AP Photo/Andrew Harnik)

Donald J. Trump took his oath of office as 45 president of the United States of America about a minute past noon on Friday (1 a.m. Saturday, Philippine time) before Supreme Court Chief Justice John Roberts Jr. at Capitol Hill, seat of the US Congress.

Actually, it was 58th inauguration of a US president, Sen. Roy Blunt, chairman of the Joint Congressional Committee on Inauguration Ceremonies, noted in his opening remarks.

As some TV news anchors, noted Trump’s inauguration was historic in many ways.

For one, Trump is one president who had not served in government – either as a civilian official or military official.

The inauguration also has the most number of past presidents who attended, along with their wives.

Besides Obama, there were Jimmy Carter, Bill Clinton, and George W. Bush.

Of the surviving presidents, only George H.W. Bush was absent, because was still in the hospital where he had been admitted this week for treatment of pneumonia. His wife, Barbara, was also admitted to the hospital after falling ill.

Following the path of inaugurations past, Donald Trump and Barack Obama rode together to the US Capitol Friday as the real estate mogul and reality TV star who upended American politics prepared to be sworn in as the 45th president of the United States. His ascent puts Republicans in control of the White House for the first time in eight years.

“It all begins today!” Trump tweeted at daybreak, before attending a morning church service with his family. “THE MOVEMENT CONTINUES – THE WORK BEGINS!” –With a report from AP /ATM