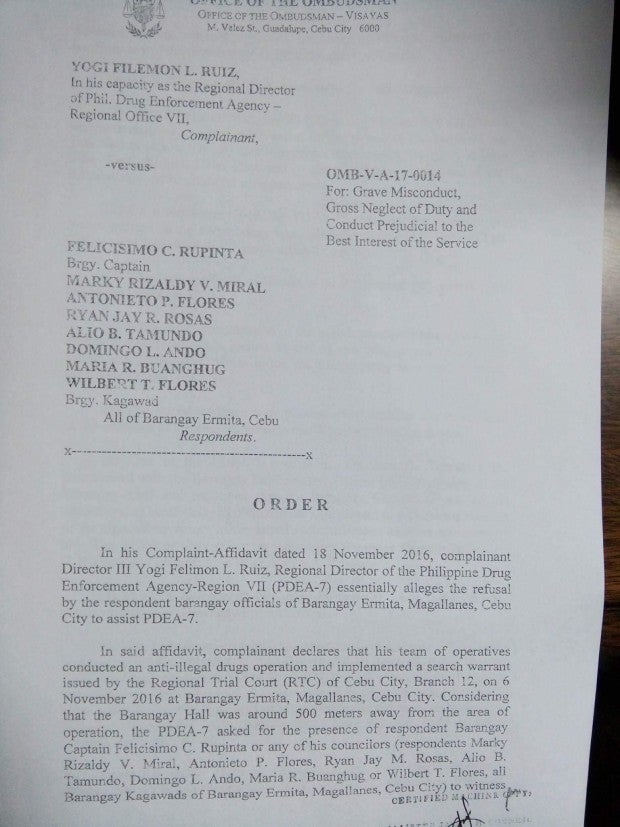 CEBU CITY—The Department of Interior and Local Government in Central Visayas (DILG-7) has sought the appointment of caretakers for a village here where all officials have been ordered suspended pending investigation for failing to assist in an anti-drug operation.

Rene Burdeos, DILG-7 director, said he referred the suspension of Felicismo Rupinta, Ermita barangay (village) captain and all seven councilors to their head office in the absence of existing law that would specify who shall take over a village in the event that all officials were to be suspended.

“This is the first (time) an incident like this happened in Central Visayas. We believe it is the President who has the authority to choose persons whose appointment is not provided for by law,” Burdeos said in an interview on Friday.

The Office of the Ombudsman in the Visayas ordered the preventive suspension of all village officials of Ermita pending an investigation on their alleged failure to cooperate in a drug raid in the area last November 2016.

Deputy Ombudsman for the Visayas Paul Elmer Clemente temporarily stripped the respondents of their power and responsibilities until the administrative adjudication on the case was completed, “but not to exceed six months without pay.”

“As the top barangay officials in Ermita, the continued stay by any of the respondents in office may prejudice the case filed against them,” said Clemente in his order dated Jan. 16 but released to the media on Thursday afternoon.

“There exists the possibility of an unhampered access and undue influence by respondents to any potential witness to the case by virtue of their respective positions and their proximity to the area where the anti-drug operation conducted by the Philippine Drug Enforcement Agency in Central Visayas (PDEA-7) took place,” he said.

The suspension stemmed from the complaint filed by PDEA-7 Director Yogi Filemon Ruiz that the respondents didn’t cooperate with the agency during the drug operation conducted last Nov. 6 in a “shabu tiangge,” located just 500 meters away from the Barangay Hall of Ermita.

The raid yielded P800,000 worth of suspected shabu as well as the arrest of Richard Cañete, who was suspected to maintain the alleged “shabu tiangge.”

Rupinta, however, described as “unfair and unjust” the Ombudsman’s order, saying there was no due process since they were not given an opportunity to answer the accusations against them.

On Friday, the beleaguered village chief filed a motion for reconsideration at the anti-graft office.

He said that if their motion was denied, they would seek relief at the Court of Appeals.

Burdeos said DILG-7 will implement the 60-day preventive suspension order once they get the go signal from Interior Secretary Ismael Sueño.

Even if the respondents would contest the ruling before the Ombudsman or the Court of Appeals, he said the preemptive suspension order shall be implemented.

“That order is final and executory,” Burdeos said./rga