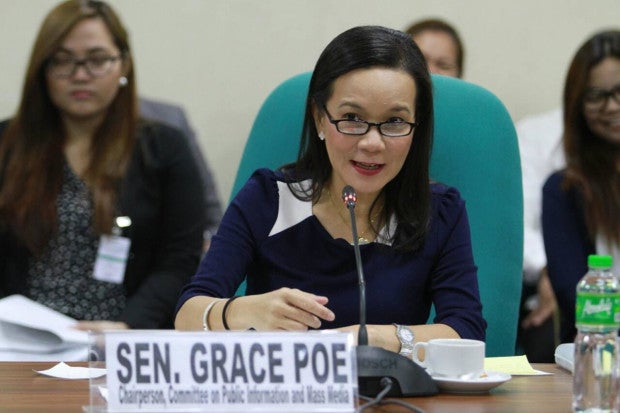 President Rodrigo Duterte should not only express “outrage” but a “forceful and unequivocal” condemnation of the killing of a Korean national right inside the Philippine National Police (PNP) headquarters, Senator Grace Poe said on Friday.

Poe was reacting to reports that South Korean businessman Jee Ick-joo was strangled inside the PNP compound by Senior Police Officer 3 Ricky Sta. Isabel, alleged leader of a group that abducted the victim in his house in Angeles City, Pampanga last October.

“Outrage must also come from the President. He must be one with the people in demanding justice. His condemnation must be forceful and unequivocal,” she said in a text message.

The incident, Poe said, was also a “litmus test” of PNP chief Director General Ronald “Bato” dela Rosa’s vow that he would not tolerate criminal acts of his own people.

“This is one case that he must show resolve, boldly that it will leave no doubt in the minds of our enraged citizenry that these men will be punished,” she said.

“Any hesitation on his part, or any move that will show partiality, will damage his reputation and the organization he leads. It should be as swift as the way the PNP conducts ‘tokhang’ operations,” the senator added, referring to the police’s anti-drug campaign.

Poe, in particular, urged the PNP-Internal Affairs Services to immediately conduct a probe to identify and act on the policemen allegedly involved in the killing.

“With the DOJ (Department of Justice) findings, the Internal Affairs Services has no other choice but to immediately run the course of investigation for the identification and dismissal of all the cops involved in the commission of such heinous crime,” she said.

Poe headed the Senate committee on public order and dangerous drugs during the 16th Congress. RAM/rga