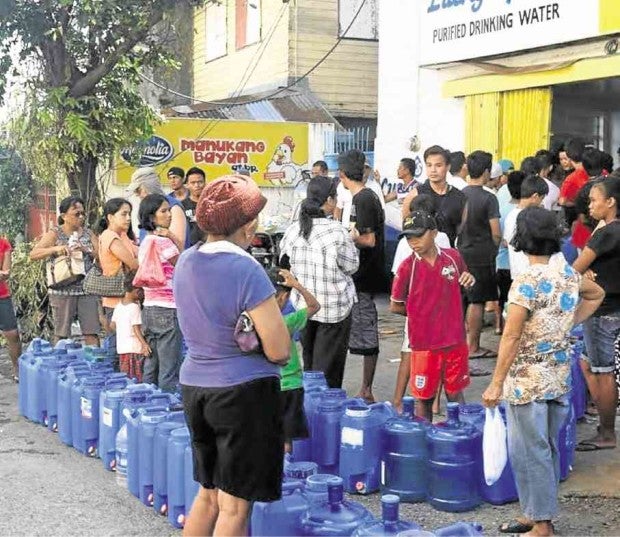 In this Jan. 3, 2017 file photo, residents in the Catanduanes capital of Virac queue at a water refilling station after Typhoon “Nina” damaged pipelines and water sources, cutting supply in the town. —FERNAN GIANAN, INQUIRER SOUTHERN LUZON

MANILA, Philippines — Sen. Sherwin Gatchalian has called for emergency funding to immediately restore power in disaster-hit areas as he slammed the Department of Energy (DOE) for lacking a crisis protocol that could prevent prolonged power outages.

Gatchalian has pushed for the passage of his measure that aims to support electric cooperatives in preparing for disasters and restoring power in calamity hit areas, noting how such aspect of emergency response has long been neglected.

“When an area is hit by a typhoon, it should not take one or two months for power to be restored. In 48 hours, power should be back on, or even less,” Gatchalian told reporters after a committee hearing on his proposal, on Thursday.

“This will help electric cooperatives recover so that our consumers could get their power back [after a calamity],” he said.

Under Gatchalian’s Senate Bill No. 1253, a P750-million fund will be allocated annually to help electric cooperatives both in preparing for disasters and in immediately getting power supply back on after disasters.

“This law will add funds so electric cooperatives in devastated areas could recover immediately. [The fund is for] preparation and restoration [of power].  These are the most important components of the bill,” Gatchalian said in an interview.

“It’s for preparation so that the electric posts won’t easily topple, the equipment won’t easily break down, because they would already be able to procure durable equipment,” he said.

The lawmaker also expressed disappointment at the DOE for lacking disaster response protocol despite the country’s vulnerability to storms.

“It saddens me that while we know that more than 20 storms hit the country every year, until now they don’t have a protocol for disaster preparedness and response… After this hearing, they committed to already finalize this protocol,” said Gatchalian.  SFM