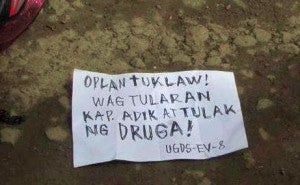 This is the note that the killers left on the body of Barangay Chairman Roberto Habilles Jr. (Photo by ROBERT DEJON/Inquirer Visayas)

CALBAYOG CITY — A barangay chief and his companion were shot dead on Thursday morning while on their way to meet Mayor Ronald Aquino of Calbayog in Samar.

(“Don’t follow the Captain an addict and a pusher! UGDS-EV-8”)

Pueblo said investigators were still trying to figure out what UGDS-EV-8 stood for, as it was the first time they had encountered the initials, apparently the name of a group.

According to the intelligence chief, Habilles and Ygbuhay were on their way to the Calbayog City Hall for an appointment with the mayor to discuss the possibility of Ybguhay taking over the post of his brother, a barangay kagawad, who died last month.

Barangay Dinagan is about 15 kilometers away from the city proper.

Habilles and Ygbuhay were on a motorcycle traversing a muddy road at around 8 a.m. when unidentified men came out under cover of thick grasses and fired at them.

As the two men fell on the ground, the gunmen approached them and shot them in their faces and heads until they were almost beyond recognition.

Scene of the Crime Operatives recovered empty shells from three types of firearms – an M-16 rifle (5.56 mm), a 9-mm pistol, and a .45-caliber pistol.