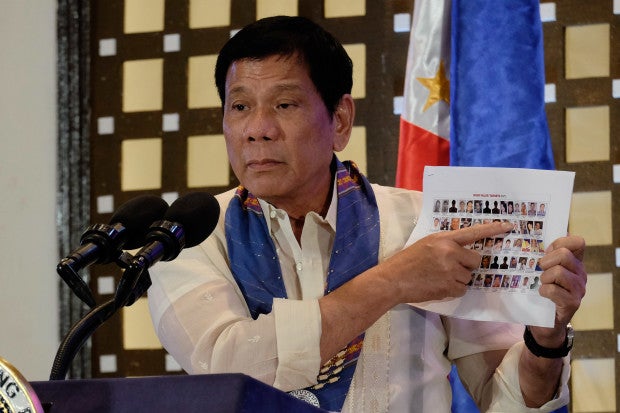 DAVAO CITY — President Duterte was “pleading” when he faced over 70 governors on Thursday, to discuss the government’s difficulty in crushing drug trafficking in the country, said Davao del Norte Gov. Anthony  del Rosario.

The governor added that Duterte remained angry at former police general and Daanbantayan, Cebu Mayor Vicente Loot for his alleged coddling of drug traffickers in and out of the police service.

The President also named three persons from Region 1 or the Ilocos Region, as being involved in drug trafficking, Del Rosario said.

“He was more like a local executive speaking to a fellow local executive when he talked to us,” Del Rosario told the Philippine Daily Inquirer by phone. “It’s as if he wasn’t the President.”

“Nagpakumbaba siya (He showed humility), explaining the magnitude of the drug problem, telling us he could not solve it alone,” the Davao del Norte governor said.

The President was in his usual combative self when the meeting was underway, with Mr. Duterte cursing at some point, Compostela Valley Gov. Jayvee Tyrone Uy said.

“But towards the end, he was pleading for us to help him in the campaign against drugs,” Uy said.

The two governors said Mr, Duterte also brandished a thick file containing the names and pictures of government officials and other personalities supposedly involved in the illegal drug trade.

Like his meeting with the mayors, Duterte also showed his disgust over alleged narcopoliticians, Del Rosario said.

Duterte also mentioned “two or three names from Region 1 allegedly into drugs,” but Del Rosario said he had no idea whether those were politicians or not.

Del Rosario said the governors were silent and appeared attentive throughout the meeting, which started around 2 p.m. and lasted a little over an hour.

“I think it was a positive experience. We understood what he wanted. For me, I support his call,” Del Rosario said. “I’m also interested to know who are those involved in illegal drugs in my province and stop this problem.”

For Uy, the President’s message was clear.

Del Rosario said the governors came to the Palace and left the venue in their own vehicles.  SFM