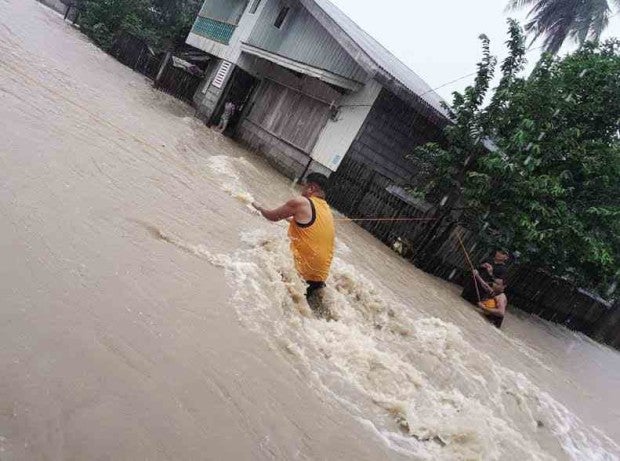 TAGUM CITY—More people had to leave their homes on Thursday as heavy rains triggered floods in sections of Mindanao.

Disaster response officials have yet to determine the number of displaced residents, but the death toll in floods that hit provinces in Northern Mindanao and the Visayas had risen to 12, after the body of a man earlier reported missing in Sapang Dalaga town in Misamis Occidental province was found.

On Thursday, about 6,000 people were evacuated as floods hit villages in Davao del Norte and Compostela Valley provinces.

Homes, rice paddies and banana plantations were submerged as the Liboganon and Saug rivers swelled. Those in low-lying communities in the towns of Kapalong, Braulio Dujali and Asuncion in Davao del Norte fled to higher grounds, according to the Davao del Norte Provincial Disaster Risk Reduction and Management Council.

Water level of the Liboganon River had risen to the critical level of 6.5 meters on Thursday morning, reports from the Kapalong government said.

In Agusan del Sur, three houses were swept away by rampaging flood water in Barangay Poblacion in Loreto town but no one was hurt.

“The level of floods we experienced now is much higher than what we experienced during Typhoon Pablo in 2012,” said Marcos Gonzales, municipal disaster risk reduction management officer of Loreto.

“We fear the floods could even rise as volumes of water from the mountains of Bukidnon rush toward us,” said Giovanni España, Loreto information chief.

Also flooded were low-lying villages in La Paz, San Luis and Veruela towns, which are near the Agusan River.

In Dinagat province, local officials have prepared for preemptive evacuation as the island continues to experience moderate to heavy rains in the past two days, Gov. Glenda Ecleo said.