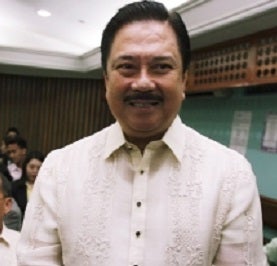 MANILA — The Sandiganbayan will proceed with the $2-million forfeiture proceedings against former Justice Secretary Hernando “Nani” Perez, as it affirmed the denial of the motions to dismiss the case.

In a 52-page resolution, the Special Third Division voted 3-2 to deny the appeals of Perez and businessman Ernest Escaler against the Apr. 18, 2016 resolution that junked the latter’s motion to dismiss the forfeiture case.

Invoking the Office of the Ombudsman’s “inordinate delay” worked in their favor in 2009 when the Sandiganbayan dismissed their criminal case for extortion, a decision affirmed by the Supreme Court in 2013.

However, the anti-graft court rejected this argument for the forfeiture proceedings, being civil in nature and independent from the criminal case.

The resolution, penned by Presiding Justice Amparo Cabotaje-Tang, also said there was no showing that the Ombudsman’s nine-year preliminary inquiry on the forfeiture case from 2005 to 2014 was deliberately hampered.

Unlike criminal cases, civil actions are only deemed initiated when they finally reach the court, as this case did in 2014.

“The respondents have failed to present any tenable ground that would merit a reversal of the Court’s Resolution promulgated on April 18, 2016,” read the resolution penned by Cabotaje-Tang.

The case arose from Perez’s alleged extortion of Mario B. Crespo, alias Mark Jimenez, in February 2001, so he would not be included in the plunder investigation against resigned President (now Manila Mayor) Joseph Estrada.

The amount, which earned Perez the moniker of “Two-Million Dollar Man” as he was called in the privilege speech of Bulacan 2nd Dist. Rep. Wilfrido Villarama in 2002, was allegedly coursed through Escaler’s bank account in Hong Kong.

Other respondents include Perez’s wife Rosario, and his brother-in-law Ramon Antonio Arceo, Jr.

In seeking a halt to the forfeiture proceedings, Perez and Escaler cited several other procedural and jurisdictional grounds to dismiss the case.

The court rejected Perez’s claim that the forfeiture petition was “jurisdictionally defective” over the Office of the Ombudsman’s alleged failure to hold a preliminary inquiry.

Initially on July 8, 2015, the court remanded the case back to the Ombudsman for the necessary proceedings, because the records did not show that a preliminary inquiry took place.

Prosecutors then submitted proof that one was really held, which was why the court in its Apr. 18, 2016 resolution declared “the parties’ respective motions for reconsideration are granted.”

The court in its latest resolution sustained that earlier action and denied Perez’s appeal. Even if state prosecutors only belatedly submitted its proof, the court deemed this a “mere technicality” that could be set aside “in the higher interest of justice.”

The court also rejected Perez’s argument that the pending forfeiture case amounted to forum-shopping, because the Office of the Ombudsman dismissed an earlier bid in 2014.

Citing the prosecutors’ clarification, it noted the dismissed case involved the Perez couple’s properties stated in their asset disclosures from 1995 to 2000.

Since these were not related to the amount allegedly extorted from Jimenez, the court said that “unquestionably, there is no forum-shopping to speak of.”

The court also disagreed with Escaler’s argument that the Ombudsman failed to comply with the requirement that a forfeiture complaint be initiated by a taxpayer.

It said that while Jimenez only filed a criminal and administrative complaint against Perez, the Ombudsman could determine if there was a ground to also seek the forfeiture of allegedly ill-gotten wealth.

The court also repeated its earlier pronouncement that the dismissal of the extortion case against Perez did not prevent the Ombudsman from attempting to forfeit the $2-million in the government’s favor.

According to the court, civil liability in forfeiture cases does not necessarily have to arise from the commission of a criminal offense such as plunder, as courts can determine if the property is not proportionate to the person’s legitimate income.

It has also reiterated that the constitutional right of the State to recover unlawfully acquired properties is “imprescriptible,” which meant the government could initiate the action at any time.