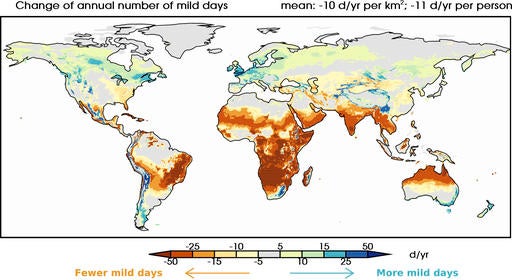 In this image provided by Karin van der Wiel/ NOAA/ Princeton University, shows climate change effects on patterns of mild weather. Kiss goodbye some of those postcard-perfect, ideal-for-outdoor-wedding days. A new study said global warming is going to steal some of those exceedingly pleasant weather days from our future. On average, Earth will have four fewer days of mild and mostly dry weather by 2035 and ten fewer of them by the end of the century, according to a first-of-its-kind projection of nice weather. AP

WASHINGTON — Global warming is going to steal away some of those postcard-perfect weather days in the future, according to a first-of-its-kind projection of nice weather.

On average, Earth will have 10 fewer days of mild and mostly dry weather by the end of the century, the researchers estimate. Some places will get more days perfect for picnics or outdoor weddings, while other places will lose a lot. Rio de Janeiro, Miami and much of Africa are big losers, while Europe and Seattle will gain nicer weather.

“It’s the type of weather where you can go outside and do something fun,” said study lead author Karin van der Wiel, a meteorology researcher at Princeton University and the National Oceanic and Atmospheric Administration. “It’s not too cold. It’s not too hot. It’s not too humid.”

For the past three decades, the world has averaged 74 mild days a year. But by 2035 that will shrink to 70 and then 64 by the last two decades of the century, according to the study, published Wednesday in the journal Climate Change. Mild weather was defined as between 68 and 86 degrees (18 and 30 degrees Celsius) with low humidity and no more than a trace of rain.

Any change depends on where you live and the time of year. For example, on average, the U.S. will lose nine mild summer days by the end of the century, although most is gained back with more mild days in the winter, spring and fall. The report estimates that Washington, Chicago, New York and Dallas will lose two weeks of pleasant summer weather but some is gained back. On average, Washington loses 13 mild days; Atlanta, 12; Chicago, 9; Denver and New York, 6; and Dallas, 1.

The biggest losers will be the tropics and nearly all of Africa, eastern South America, South Asia and northern Australia. Rio de Janeiro, on average, will see 40 mild days disappear. Miami will lose its only mild summer day and nearly a month of spring and fall mild days by 2100.

“The changes are more dramatic in parts of the developing world, where you have high concentrations of populations,” said NOAA climate scientist and co-author Sarah Kapnick.

Other places, especially northern developed ones, will gain some of what the tropics lost. England and northern Europe are big winners. Seattle should pick up nine mild days and Los Angeles, which already has a lot of nice weather, gets six extra by the end of the century.

The scientists didn’t specifically focus on whether the loss of mild days has already started globally, but they did see it happening in much of Africa and South America, Van der Wiel said.

Climate scientists usually focus on extreme weather — record heat, tropical cyclones, droughts, floods — and how they could get worse as the world warms. Kapnick said she wanted to look at nice weather because her friends kept asking her what day to choose for good wedding weather.

The team used a middle ground scenario for global warming — not worst-case runaway carbon pollution and not dramatic cuts in emissions of heat-trapping gases — and ran different computer simulations to see what would happen.

Stanford University climate scientist Chris Field, who led an international study of extreme weather, questioned the purpose of the study: “Extreme conditions are the sharp end of the climate stick. It is in the extremes when things break and damage occurs.”

National Center for Atmospheric Research scientist Gerald Meehl, who also studies extreme weather, said a decrease in mild weather may not quite have the economic and health costs but there are other factors such as tourism “or simple human enjoyment.”