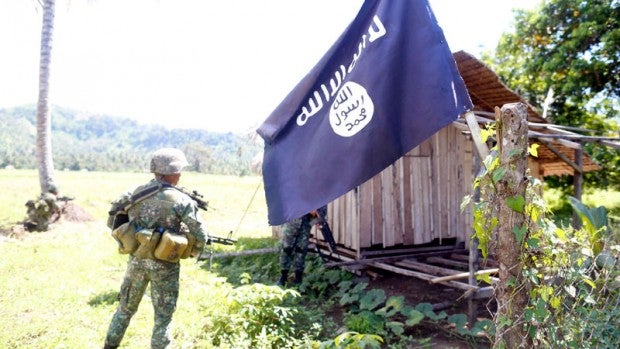 In this March 2016 file photo, a soldier of the Philippine Marines helps secure an area of a camp government troops captured from armed groups that have expressed alliance with ISIS in Sultan Kudarat province. JEOFFREY MAITEM/ INQUIRER MINDANAO

Galgo said Abdullah, alias Ali, was once a village chief who was believed to have assumed the leadership of the AKP in the region, following the killing by government forces on January 5 of the group’s leader, Mohammad Jaafar Maguid, alias “Commander Tokboy.” Maguid was killed while three of his companions were arrested during a brief shootout inside a resort in Kiamba, Sarangani.

Galgo said armed with 21 search warrants for illegal possession of firearms and violation of the anti-illegal drugs law, the police team led by Supt. Maximo Sebastian Jr., the chief of the Regional Anti-Illegal Drug Special Operations Task Group, swooped on an AKP safehouse in Barangay Lapu.

Abdullah also faces kidnapping charges, according to Sebastian who did not specify the case the suspect was involved in.

“Seven other companions of the suspects managed to escape during the raid,” Sebastian said.

Seized from the suspects and inside the safe house were prohibited drugs, firearms and ammunition for various calibers, and explosives.

The three suspects have been temporarily held at the Polomolok police detention cell and were being placed under close watch, Galgo said.  SFM

Read Next
It’s official: VAT exemptions on senior citizens, PWDs retained
EDITORS' PICK
Beyond the Chocolate Hills: A farm-to-table, heritage culinary adventure of Bohol
MyCitiHomes premiers PH’s first 3-star certified BERDE District residential development
‘Crash Landing on You’ couple confirms pregnancy
Enrile contracts COVID-19: ‘To my critics and enemies, I am not going to die yet’
Metro Manila’s COVID-19 positivity rate jumps from 3.9% to 5.9% — OCTA
House energy committee chair Arroyo bats for cheap electricity
MOST READ
Duterte: It was correct for Bongbong Marcos to ‘decline’ presidential debates
Enrile contracts COVID and snipes at critics, foes: ‘I am not going to die yet’
Russia steps up missile strikes on Ukraine as G7 leaders gather
Dennis Padilla answers Leon Barretto’s open letter: ‘Been reaching out to you for 15 years’
Don't miss out on the latest news and information.